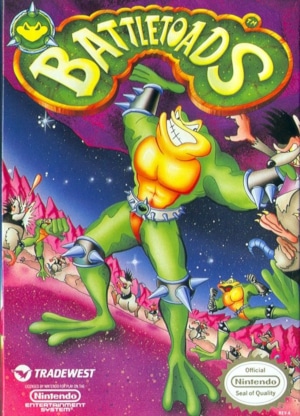 Mind you, it wasn’t quite the deluxe product you would hope to see from a commemorative release like this. iam8bit’s album was missing the DMC samples Wise used, for example the drums on “Title Theme”. It does make you wonder what materials the album producers were working with. Thankfully, this can’t distract from the eccentric brilliance of Wise’s work. A comparison with the Teenage Mutant Ninja Turtles NES games and their music is not only apt, but also proves insightful. The Konami titles took the new jack swing genre popular around the late 1980s and early 1990s and harnessed its fusion of hip-hop, dance pop and R&B to generate the kind of hard-swinging urban cool that would fire up gamers. Battletoads, on the other hand, has something very different in mind.

Things start out fairly conventionally – if rockingly – with “Title Theme”. The theme in question is a three-note stomp from both square wave channels, answered by one of the NES’ better guitar imitations. Upbeat and with an earthy rock’n’roll groove, “Title Theme” feels like the perfect opener for an 8-bit beat’em up. These rock influences – previously heard in more purist fashion on Wise’s Snake Rattle ’n’ Roll – seep into other parts of the Battletoads soundtrack, but not as often as one would think. “Turbo Tunnel” is the game’s most action genre-typical composition, offering a chiptunes take on head-nodding mid-tempo rock. With its constant forward motion, steady yet varied drum work and motivating melodic phrases, this track feels – not unsurprisingly – like a racing game composition. 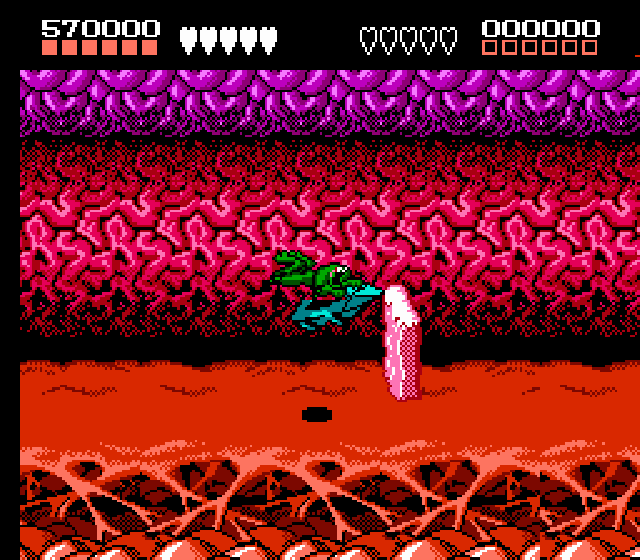 Later levels that also ask players to control some sort of vehicle reveal the Battletoads soundtrack’s true stylistic intentions. “Surf City / Terra Tubes” has no interest in straightforward underscoring of the level’s high speed action. With little melodic content to empower gamers, “Surf City / Terra Tubes” focuses much more on interlocking, surprisingly quiet rhythms whose twitchiness makes them enticingly slippery. The track’s initial melody line follows suit. It starts with a sustained decrescendoing note, as if fading out of view before it can actually get going.

“Volkmire’s Inferno” plays even less by the rules of 8-bit action game scoring. Staccato chords that would usually drive the piece refuse to play on the beat. The result is a breathless, jerky progression that hints at a melody, but never clearly spells it out. Wise teases listeners even more when the track’s B section suddenly delivers the soundtrack’s most uplifting, catchy melody. That is, if the major key tune didn’t feel so rushed, each note prematurely cut off by the next one. Underneath all this melodic playfulness, polymetric pulse wave and noise channel lines complicate the track’s layout further. If NES soundtracks ever managed to combine math rock and pop music, it’s on “Volkmire’s Inferno”.

On other tracks, Wise hews closer to action game-scoring conventions, but only to bend them to his idiosyncratic vision. The first stage theme, “Ragnarok Canyon”, is an almost entirely groove-based mood builder, with an air of cool swagger and superiority. At this stage, the mood is glum and enigmatic, but the player is still in control – even if the track keeps building towards a large reveal that never happens. “Wookie Hole” equally works primarily with layers of rhythms, more urgent and pushing this time. An explosion-like effect at 1:09 finally delivers some release, but the music quickly switches back into another convulsing episode. 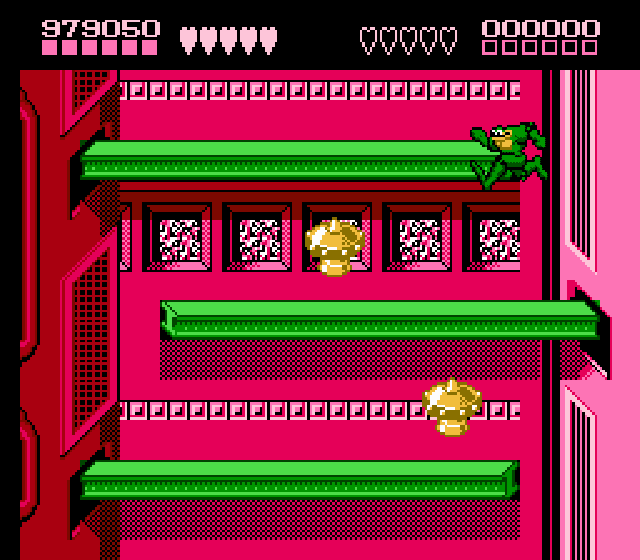 And when the final level draws nearer and one would expect the music to ramp up, Wise does the opposite. “Intruder Excluder” perfectly highlights the Battletoads soundtrack’s minimalist, sometimes skeletal nature. Its constant rhythmic propulsion remains elusive rather than empowering, and at times feels willfully repetitive. What little melody there is appears in the form of snappy, effective short phrases. They refuse to deliver any melodic gratification, but instead simply push the music further on and on. Again, different to the TMNT Konami games, this isn’t a score that imbues players with confidence before the final showdown. “The Revolution”’s precariously rising arpeggios and anxious electronic pulses are merely the sound of a nervously clinched fist. Like the game itself, the Battletoads soundtrack lets players know that the odds are against them. Ultimately, the Battletoads soundtrack is an unexpected exercise in world building, creating an uncanny, hostile, but nevertheless intriguing environment.

As it turned out, porting this somewhat unusual NES action score successfully to other platforms was a bit of a challenge. All ports present the same material as the NES soundtrack and adapt it for their respective platform.

The Game Boy port (confusingly titled “Battletoads in Ragnarok’s World”) sounds nearly identical to the NES soundtrack, but has some quirks. It adds a few stereo effects that don’t change the character of the music much. “Wookie Hole” plays faster than the original and feels more determined. Weirdest of all, this port botches the mischievous echo on the lead melody on “Arctic Caverns”, so that the tune is now out of sync with the rhythms.

The Game Gear conversion suffers from the system’s inherently limited, lighter timbres that struggle to bring across the soundtrack’s brooding yet agitated mood. Throughout its running time, the port lacks the atmospheric nuances that made the NES original tick. At least this version helps one appreciate Wise’s smart use of the NES’ duty cycles to evoke the soundtrack’s peculiar atmosphere.

The Amiga and identical Amiga CD32 port beef up the instrumentation, but that actually has a detrimental effect on the music, since the original made so much of its impact through its borderline skeletal sound that is now lost. Now the Battletoads soundtrack plays like a more traditional action score that is entertaining enough during its more energetic and melodic moments. However, the Amiga soundtracks lack the surprising changes of timbres that make the Sega Genesis conversion the best port.

This playlist is a curated selection of music from the soundtrack album (including the DMC samples on Title Theme).