It seems fair to say that it’s usually indie video games that push the boundaries of the medium and have gamers and audiences asking “But is it a game?” (“Is it art?” being a close second). One of these games, Dear Esther, was initially a research project at the University of Plymouth. Players find themselves on a barren island in the Hebrides and are left to explore the surroundings. Meanwhile, a male voice-over reads out random letter fragments to a woman named Esther. With no threat of death and no tasks to be fulfilled, Dear Esther instead aims to capture gamers’ intrigue simply by letting them figure out – or just interpret – the fragmented narrative, hinting at a tragedy that precedes the events in the game. Encouragingly, this experiment in digital storytelling received significant critical acclaim and was a commercial success as well.

Dear Esther also launched the game music career of composer Jessica Curry. Curry’s body of work before Dear Esther included arts installations, film soundtracks and cross-media projects. A co-founder of Dear Esther’s developer The Chinese Room, Curry was closely involved in the game’s creation from its inception. Her aim was for the music “to add an emotional dimension” to the game. That was a crucial task, given that Dear Esther‘s challenge-free gameplay doesn’t reward the player with a sense of odds overcome, but instead must satisfy gamers by delivering a memorable experience.

And that’s something that the Dear Esther soundtrack most definitely achieves, if through somewhat unexpected means. Curry is content to move Dear Esther along at an often glacial pace, working only with a few instruments – string quartet, two pianos, a female vocalist and sound effects – to create minimalist, sometimes nearly ambient classical music that seeks to make its mark through haunting, often dissonant textures. Listen to the nine-minute “Always (Hebridean Mix”) to witness the stunning effects that Curry’s approach yields. The piece consists almost entirely of otherworldly, elusive string chords. But these lingering notes manage to create a spellbinding, fascinating aural landscape that catapults listeners – as long as pay close attention – into Dear Esther‘s dream-like world with remarkable ease. Some soprano lines add a sense of spirituality, but certainly not redemption.

This ambivalence, this refusal to deliver emotional resolution becomes the Dear Esther soundtrack’s defining and most intriguing characteristic. The piano parts on “Twenty One” and “The Bones of Jakobson” subtly clash both harmonically and rhythmically. They never do so in such volatile fashion that it would push listeners away. But it’s still enough to make you listen closely as you wonder where the pieces are headed next. Just as you start to enjoy the comfort of “Moon in my Palm”’s surprisingly melodic strains, the intertwining violin lines turn chromatic, as they threaten the music’s sense of tonal and emotional security. The resulting subtlety of expression highlights an artist’s impressive command of instrumental colours and emotional effects.

Amazingly enough, the Dear Esther soundtrack’s heady nature never diminishes its emotional appeal. True, Curry’s compositional style might feel angular to many listeners. But those willing to let themselves sink into Dear Esther‘s music will find it a haunted, memorable world upon itself, filled with palpable sorrow and regret. Dear Esther might be one of game music’s more sparse and austere scores. But it’s precisely this restraint that makes the tangible, bittersweet emotions at the core of each composition so powerful. Even when the soundtrack is at its starkest, the music doesn’t fail to deepen Dear Esther‘s anguished mood.

This balance between emotionality and austerity, between warmth and abstraction imbues the Dear Esther soundtrack with an emotional intelligence that is rare in game scores. There’s a refreshing absence of clearly sign-posted, intended effects on this soundtrack. Instead, the score creates layers and layers of emotional meaning that the listener is left to decipher. 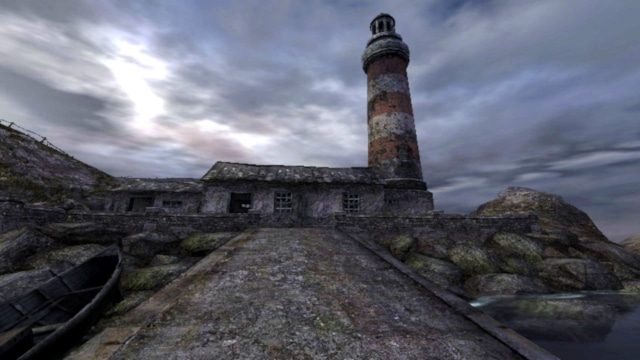 And this ambivalence also brings Dear Esther to its satisfying, if not necessarily conclusive finale. On closing track “Ascension”, the score ventures into yearning major key territory for the first time. But then the eerie, pleading ‘remember me’ chants of “Remember Me (Jakobson)” return and the listener realises that the ghosts that haunt the Dear Esther soundtrack and its protagonist are impossible to shake. This is no ascension towards the light, but instead a strange, frightening destination. And when the piece finally ends with a voice insisting ‘come back’ and a single piano note turning into an ominously flat-lining sound, Dear Esther‘s music leaves us with the same rewarding challenge as the game itself: to figure out what it all meant, and what to make of the torrent of emotions this experience has evoked.

Comparing the Dear Esther soundtrack and Curry’s later Everybody’s Gone to the Rapture proves insightful. Both scores are explorations of otherworldly realms, pondering what we will face in the great beyond. Their music is static, existing in a space where time no longer counts. Emotional states are suspended, so the protagonists can await judgment and reckoning. But Rapture is a walk through sun-lit meadows and cathedrals, facing the past with a sense of clarity and finality. Dear Esther is a much murkier affair, a trek on rocky, perilous terrain in the fog. No promise of forgiveness lights the way and every part of the journey is another disorienting step into the unknown. It’s a challenging, daring and immensely satisfying prospect few game scores are bold enough to suggest.