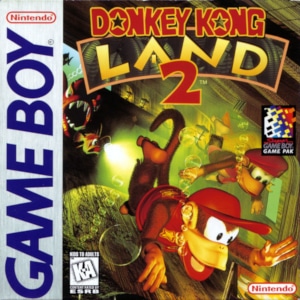 One year later, Rare released Donkey Kong Land 2 – the Game Boy port of Donkey Kong Country 2: Diddy’s Kong Quest. This time, the developers had figured out how to keep the visuals less cluttered and the game more playable. True, reviewers pointed out the lack of original content – DKL2 was more or less a straight port of DKC2. However, the SNES original’s outstanding gameplay qualities made the Game Boy version one of the system’s best platformers.

While the game itself didn’t offer much that was new, it definitely marked one beginning: that of composer Grant Kirkhope’s tenure at Rare, which would yield several classic game scores. Having played trumpet and guitar in British bands for years, Kirkhope connected with Rare through his friend Robin Beanland (who was looking for a guitar player for Killer Instinct 2). Five demo tapes later, Kirkhope landed the job at Rare, just as the company was about to become huge after Nintendo bought 49% of it.

After his work on Killer Instinct 2, Kirkhope was handed what he described as “the lowest job, which was the Game Boy job”. That job – Donkey Kong Land 2 ­– turned out to be almost overwhelmingly daunting, to the point that Kirkhope considering resigning from his job. While he had help from David Wise, working in hex while porting one of the SNES most cutting-edge scores to the humble Game Boy was an enormous challenge. It all worked out fine though, with Kirkhope saying that “I actually enjoyed it in the end, and it became a sort of challenge to see how far I could push the Game Boy.”

And yes, the Donkey Kong Land 2 soundtrack does push the Game Boy. It isn’t one of those whizz-bank Game Boy scores that appeared towards the end of 1990s, which coaxed an ungodly amount of musical activity and competing melody lines out of the hardware’s four channels. But the soundtrack does manage something quite astounding: it retains a good amount of the SNES original’s atmospheric richness and variety – and of course, its melodic beauty. For a first-time composer working with a platform and programming language he hadn’t used before, it’s an amazing accomplishment – even if Kirkhope was working off Wise’s material.

While converting DKC 2’s music to the Game Boy might seem like a fool’s errand, the SNES score is arguably the most melody-focused of the first three DKC soundtracks – and thus the best candidate for a chiptunes port. Not surprisingly, Kirkhope foregoes Wise’s carefully sculpted soundscaping and – by necessity – puts the focus squarely on the soundtrack’s melodies.

Assessing his work on the Donkey Kong Land 2 soundtrack, Kirkhope modestly stated that what he did was “a straight conversion of the music that Dave Wise had written note for note.” That’s not entirely true – just listen to Kirkhope’s version of “In a Snow-Bound Land”. On the SNES, this was the soundtrack’s wispiest, most fragile track. Kirkhope manages to retain the lead melody’s dreamy, lilting quality, despite the Game Boy’s fairly coarse timbres. He also isolates an arpeggio figure that was subtly present on the SNES track and gives it a much more prominent role, moving it into the foreground where it helps create the composition’s almost hypnotic quality. This sort of careful rearrangement and working with the Game Boy’s few duty cycles to give melodies the desired character is certainly more than a simple note by note conversion.

Other wonders of subtlety like “Stickerbush Symphony” and “Bayou Boogie” yield equally enchanting results on the Donkey Kong Land 2 soundtrack. “Stickerbush Symphony” might lack its original tinge of mystery, but its air of blissful serenity still comes across, just like the melodies’ contemplative beauty. On “Bayou Boogie”, Kirkhope replaces Wise’s layers of sound effects and textures with sustained deep chords to maintain the original’s oppressive atmosphere. The resulting brooding mood only serves to highlight the lead melody’s wistful nature all the more effectively. Other tracks like the jazzy “Snakey Chantey” are more obvious candidates for a successful translation to the Game Boy, thanks to its reliance on swinging rhythms and melodies, rather than gorgeous atmospherics.

Due to the Game Boy’s gritty noise channel and snare drum-like percussion, the Donkey Kong Island 2 soundtrack inevitably puts greater emphasis on heavy rhythms – a challenge when the original SNES score was such an understated work. Once more, Kirkhope does an outstanding job at working successfully within the Game Boy’s limitations, generally ensuring that the noise channel percussion and stronger arpeggio presence doesn’t interfere with the melodies. “Hot-Head Bop” is more of a bop now than it was before, but the greater rhythmic focus only serves to put the spotlight on the original’s impeccable groove. And the mid-90s techno of “Disco Train” makes for a mid-tempo stomper that retains the SNES composition’s variety of beats and melody bits – and its eerie undertones.

The fact that these compositions and their hardware-induced heaviness are more in-your-face than Wise’s SNES tracks even works in the favour of some cues. The undercurrent of tension that ran through the original versions of “Lockjaw Saga” and “Flight of the Zinger” explodes on the Game Boy, turning these compositions into much more outwardly dramatic compositions. Particularly “Lockjaw’s Saga” grabs listeners’ attention from the first second with its hammering percussion salvos. Again, Kirkhope does much more than simply converting Wise’s composition note by note. He strips away the layers of the SNES track and keeps exactly the right elements to turn the cue into a rousing chiptunes epic with cinematic intent and lush arpeggios. Like the game itself, the Donkey Kong Land 2 soundtrack stands on the shoulders of its big brother – but that doesn’t stop it from being one of the best in class, judged on its own merits.