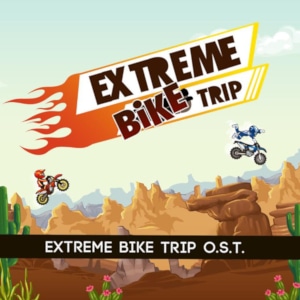 Extreme Bike Trip – both game and soundtrack – are a product of the era of digital technologies. Both are short, sharp blasts of fun that precisely know their purpose. Before the dawn of digital distribution channels, it’s unlikely they would have seen the light of day as standalone releases. They also never pretend to be more than what they are – but within their limited scope of ambition, they achieve everything they’re aiming for.

As a game, Extreme Bike Trip is based on an exceedingly simple mechanic. Race with your bike from left to right, tilt your bike forwards and backwards to not lose balance, and pick up gas canisters to make it as far into the race course as possible. Review site 148Apps nicely summed the game up as “simply a fun way to spend a few minutes”.

That’s also the perfect description for the Extreme Bike Trip soundtrack, courtesy of Big Giant Circles (aka Jimmy Hinson). His work on this score continued his collaboration with developer Roofdog Games. Hinson had previously worked with them on Pocket Mine and the Extreme Road Trip franchise. Of course, Hinson had been active in the game music scene long before. He had started out in 2004 as a contributor to game music remix website OCRemix. In 2009, Jack Wall recruited Hinson to contribute music to blockbuster title Mass Effect 2 – most definitely a high-profile debut for a former game music hobbyist. While Hinson is one of the few indie game composers to have also worked on AAA titles, the majority of his output underscores smaller-scale games such as Extreme Bike Trip. 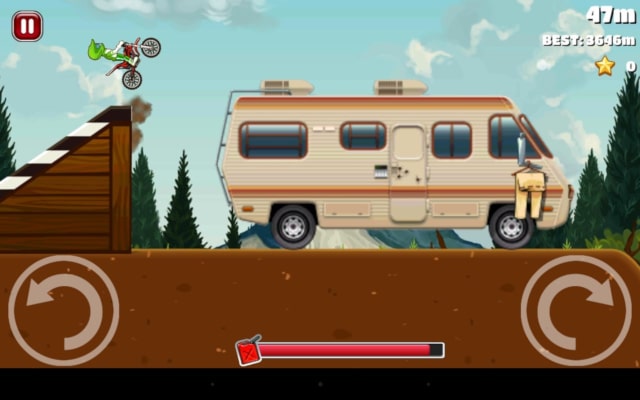 The crackling chiptune dance pop that he fills the Extreme Bike Trip soundtrack with shares the game’s virtues. Ignoring some short filler tracks, Extreme Bike Trip clocks in at just over ten minutes. However, its music does all it can to make these few minutes an experience jam-packed with fun. Of course, Hinson’s trademark musical style combining chiptune with contemporary electronics is the perfect sound for a retro racing game.

Stylistically, the Extreme Bike Trip soundtrack continues and refines Hinson’s work on Extreme Road Trip 2. Vigorous dance beats underpin exuberant chiptune melodies, with the odd hard rock riff thrown in for good measure. With no time to lose, “Extreme Bike Trip Theme (In The Zone reprise)” gets the blood pumping straight away. It quickly marries modern electronic rhythms with a chiptune melody drunk on endorphines. With its unpredictable arpeggio progressions, the melody feels like it can hardly contain its giddy enthusiasm. The track’s second melodic idea is a more focused creation, keeping its sights firmly on the finishing line.

“Kinetic Jumps” amplifies this adrenaline-charged happy-go-lucky feeling. Here the Extreme Bike Trip soundtrack makes its clearest reference to 1990s four-on-the-floor techno. Against a bed of crashing, bouncy techno beats and claps, Hinson pits soaring chiptune pop melodies. In this rhythm-heavy environment, the melodies take on an anthemic, instantly head-bopping quality that serves the music’s purpose: to give gamers both a rush of excitement and the heroic feeling that they are able to keep control of their vehicle at ever higher speeds. Both fun and triumphant, “Kinetic Jumps” cleverly calms down during its last third before revving up again for the loop. And while Extreme Bike Trip might not be a ‘big’ game, its music never feels less than lushly arranged. Sample the range of arpeggios that Hinson uses to flesh out the soundscape at the treble end on “Kinetic Jumps”. 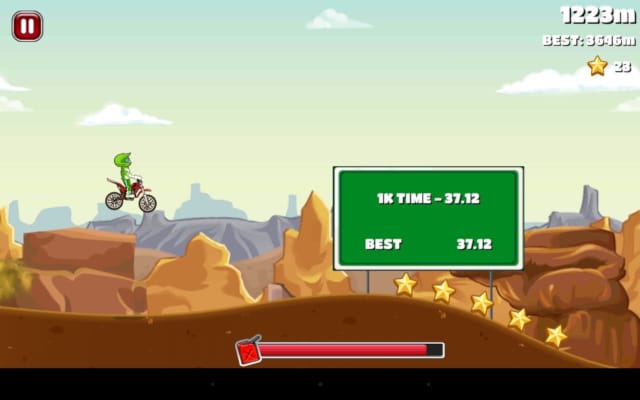 Finally, “Pop A Wheelie” boasts the Extreme Bike Trip soundtrack’s most intricate and rewarding arrangements. Now, the beats move away from straightforward techno. Instead, they follow a knotty, intriguing trajectory mirrored by an elastic, bassy synth melody. The break beats’ increased complexity finds its match in “Pop A Wheelie”’s greater melodic range, covering a soaring guitar solo as well as a rhythmically accented chiptune melody that puts emphasises every single one of its staccato notes, as if to really hammer home how powerful and awesome it is.

All this is mere preparation for the track’s unstoppable finale though. At 3:35, “Pop A Wheelie” breaks into the album’s most stunning moment. Hinson piles layer upon layer of ecstatic, wobbling melodies and synths sky-high like there’s no tomorrow, reaching higher and higher until the music turns into a small super nova of blissfully united electro and chiptune colours. The Extreme Bike Trip soundtrack finishes soon after it begins, but it sure does end with a bang.