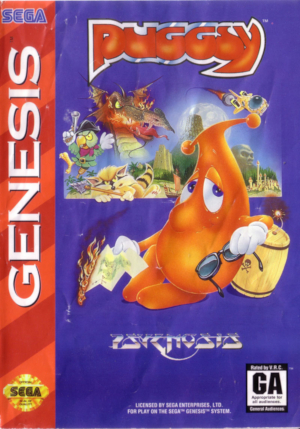 At first glance, Puggsy might have looked like yet another early-90s mascot platformer, difficult to distinguish from the glut of similar titles flooding the SNES and Sega Genesis at the time. However, Puggsy and the story of how it came to be was actually far more intriguing than that. The Puggsy character originated in a 1990 Amiga demo called Puggs in Space, designed by demogroup Dionysus, which included future game music maestro Tim Wright. After signing with Psygnosis, Dionysus was pulled out of the game’s development, which went to Traveller’s Tales. Similarly, Puggsy’s gameplay hid a few unexpected intricacies. The title heavily featured puzzles based on a physics engine – an innovative feature for a 16-bit platform. Individual objects had different properties such as buoyancy, weight and friction, allowing for more intricate puzzles than most other platformers of the era managed.

However, the game’s highlight was undoubtedly its soundtrack, one of the most creative and colourful scores written for the platform. As was typical for Traveller’s Tales Sega Genesis games of the time, Matt Furniss created the soundtrack. This led to the somewhat ironic situation of Tim Wright – one of the game’s original creators – ending up merely porting Furniss’ music for Puggsy’s Amiga version. However, as Wright stated, “his [Furniss’] songs were really well written and fun to convert to the Amiga, so there were no bad bones.” Furniss himself was clearly very fond of Puggsy, never failing to mention the game when the question about his favourite original works comes up.

Indeed, the Puggsy soundtrack is a spectacular work. Yes, Furniss’ gift for writing catchy melodies and cladding them in elaborate arrangements that prop up meticulously developed tracks is on full display here – as it is on all of the composer’s classics works. Equally, the sounds he coaxes out of the Sega Genesis are both crystal clear and impressively powerful (just listen to those rock drums), ranking up there with the very best found on the system.

However, Puggsy goes one step further. Furniss creates a unique sound world through his orchestrations. It’s a realm that’s whimsical, yet at the same time so expansive and rich in emotional depth, it’s reminiscent of a first-rate RPG score rather than a platformer. The crucial piece of the puzzle is Furniss’ decision to use bells, glockenspiel and other metal instruments as his primary melody lead instruments. It’s an inspired choice: the Sega Genesis is well-equipped to reproduce these kinds of sounds convincingly (Furniss had used bells already quite extensively on 1992’s Galahad). What’s more, these chiming instruments imbue the music with a wonderful aura that alternates between whimsy, foreboding, mysticism and unforced gravitas – giving the Puggsy soundtrack an enchanting mood all of its own.

Not only is the instrumental palette Furniss uses highly original – he also effortlessly modifies it throughout the score to carefully build the game’s vibrant fantasy world. “The Beach” is predictably laid-back and effortlessly charming, its steel drum-imitations shimmering with a silvery sheen. “The Cove” has a jaunty, sea-shanty feel to its infectious pop-inspired melodies. Meanwhile, the way Furniss spreads chromatic bell lines across the stereo field sets the blueprint for the score’s peculiar mood that’s equally upbeat and magical. Furniss’ lush orchestrations hit an early high on “The Red Woods”, which has fun playing with its syncopated meter that sees the piece progressing in unexpected ways. However, Furniss can boil things down to a single exuberant, happy-go-lucky melody that merrily wears the repetition of its memorable hooks, as he does on “The Light House”.

Amongst these light-hearted, earlier tracks on the Puggsy soundtrack, “Star Fall Lake” is a standout, articulating the score’s mystical tendencies most clearly. A percolating, tinkling melody leads the way before slow bells and swelling synths enter. It’s the perfect, languid union of melodies and orchestrations to underscore the cue’s dream-like location, while the music never loses its accessible pop appeal. A bassoon-like lead even adds a bit of gentle cheekiness towards the end of the composition. It’s the kind of musical writing that evokes a world filled with innocent, child-like wonder, yet massive in scope (a feat Grant Kirkhope would emulate on Viva Piñata). “Pyramids” finds a different outlet for the score’s brand of mysticism that beautifully suits this particular location as well, shrouded as it is in mystery and legend.

However, the Puggsy soundtrack’s atmosphere soon turns darker and more diverse, revealing Furniss’ true ambitions. “Splinter Town”’s shady mood hits unexpectedly, its almost mock-Gothic streak hiding a mischievous tone that at any moment might turn into something more malicious. Listeners who might have feared after the score’s first half that Puggsy would be too fluffy will welcome “Darkblade Forest”, which evokes a forbidding, awe-inspiring location through a stoic composition somewhere between fantasy epic and rock anthem. Furniss’ strategy to organically broaden the music’s scale hugely benefits from his trademark rich, massive FM synth tones. Working from such a base, “Darkskull Castle” can venture further still, opening with dissonant, squelching synths and a jarring lead set against a single-mindedly thumping beat. And yet, the piece – oppressive yet rich in timbres and melodic content – soon moves elegantly through various sections, even arriving at a semi-heroic passage that closes with a fanfaric melody.

Yes, as cute as the game’s lead character might look, the Puggsy soundtrack paints his journey as a grand adventure, full of perils and wonders. “Fire Heart”’s treacherous melodies proceed almost exclusively in chromatic intervals, rendered in cavernous acoustics (thanks to superbly implemented echo effects) that give the piece its nightmarish quality. Constantly kept on edge by its aggressive melodies, “Fire Heart” beautifully builds its simmering, creepy mood. Final level track “Raclantis Docks” provides an outlet for all the pent-up tension. The cue’s churning, multi-layered rhythms form the soundtrack’s most strident percussive backdrop, backing a melody whose repetition Furniss carefully harnesses to create urgency and focus. Of course, things must end on a cheerful note and “Ending Theme”’s gently soaring, crystalline 80-synth pop makes for a perfect close to one of the 16-bit era’s greatest jump’n’run scores – expanding the genre’s artistic boundaries in the same way the game itself does.