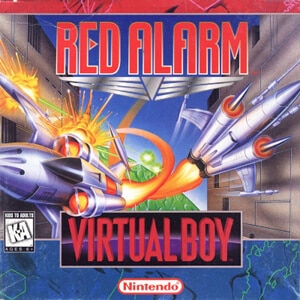 While only 22 Virtual Boy games were released during the console’s lifetime, there’s still one gem to be found amongst the soundtracks that accompanied these titles: Ken Kojima’s Red Alarm, one of the console’s launch titles. A wire-frame graphics rail shooter inspired by Star Fox, Red Alarm was developed by T&E Soft, who had already proven their shoot’em up credentials with the jaw-dropping Game Boy title Chikyuu Kaihou Gun ZAS. Red Alarm found little commercial success like all Virtual Boy games, but reviewers received it better than most other VB titles.

It also features Ken Kojima’s best score, a work several leagues ahead of his other game soundtracks – including solid contributions like 3-D Tetris and Blaze & Blade: Eternal Quest, and disappointments like The Note. Little is known about Kojima (at least in the English-speaking corners of the internet), so Red Alarm stands as an enticing, solitary proof of his talents. 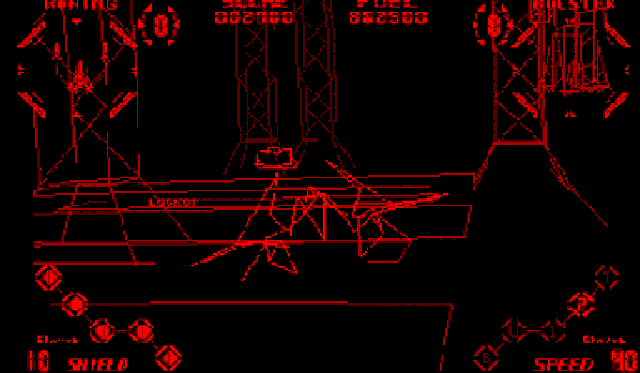 While the Virtual Boy was technically a 32-bit platform, its six sound channels (five wave + one noise) produce results closer to the Game Boy’s gritty timbres. As such, Red Alarm is part of the chiptune era of game music and an excellent example of how limited technology can still produce music of considerable complexity. Indeed, if there’s one thing that stands out about the Red Alarm soundtrack, it’s Kojima’s all-guns-blazing attitude, as he creates music of relentless intensity.

First track “Opening” quickly shows that Kojima isn’t planning to take any prisoners. Building in nicely cinematic fashion from a tentative, slightly unsettling opening, “Opening” bursts into a dizzying array of densely layered industrial rhythms that will become the soundtrack’s calling card. Indeed, sometimes Red Alarm feels like an extended prog-rock version of the NES Mega Man games’ characteristic rhythms. However, Kojima keeps the track’s forward movement catchy and driving despite the music’s rhythmic complications. His talents extend to melody writing as well. “Opening”’s melody lead is an emotionally complex and beautifully long-spun creation – with anthemic tendencies but not outright heroic, striding forwards against increasing odds. Kojima’s smart use of the stereo field here and throughout the soundtrack increases the music’s scope even further, to the point where “Opening” feels like a space opera score sharpened by industrial rock’s fierce energy.

And initially, the Red Alarm soundtrack maintains this stylistic impression. While unusually intense for a first level track, “Stage 1” has the same ear-catching contrast that powered “Opening”. An uplifting, if somewhat tentative melody – now with a stronger pop bent – contrasts with a web of constantly churning rhythms that somehow never lose their irresistible forward drive. “Stage 2” is an intriguing experiment, introducing an almost unsettlingly playful and bouncy feel to Red Alarm’s rough edge, the latter still present through the cue’s pointed melody leads.

But very soon, the Red Alarm soundtrack more than lives to its title. The first two boss tracks are more fragmented, structured around classic crisis motifs and quavering, startled melody leads. But it’s really on “Stage 3” that the Red Alarm soundtrack reveals its intention to underscore overwhelming odds and enemy numbers, rather than to herald the hero’s progress. Its melodies thinned out to repetitive, surreal two-note pulses, “Stage 3” feels like a blasted wasteland, with lethal dangers ready to strike at any moment. A curious breakdown just before the loop lets the music’s asphyxiating atmosphere abruptly fade into silence, turning “Stage 3” into Red Alarm’s most enigmatic moment. “Boss 3” dares listeners with a nearly five-minute run time, particularly oppressive rhythms and a minimalist, slow melody whose tortured attitude only turns bleaker and bleaker with each pained repetition.

“Boss 3” is proof that while Kojima writes a constantly electrifying action score, he also knows how to build a specific, brutal mood – as if the entire game took place inside some unrelenting cosmic furnace. Kojima is also clever enough to still sparingly deploy melodic elements. It allows the melodies to stand out all the more once they appear, pulling in listeners even when the music’s jagged motion is less than accessible. And so “Stage 4” returns “Stage 1”’s melodicism, while “Boss 4” spectacularly dismantles it again. Initially scattered across the stereo field, “Boss 4”’s resolute melody manages to reassert itself against remarkably single-minded, hammering rhythms – before the tune slowly veers off into less harmonically secure, discordant territory, subtly losing its foothold before it completely disintegrates. “Stage 5” is equally clever in its development, carefully escalating the conflict between the soundtrack’s consonant, aggressive and experimental tendencies.

It’s an appropriate stage setter for “Boss 5”, which brings the Red Alarm soundtrack’s ferocity to a head. Its rhythmic background sometimes approaches white noise, while melodies veer between bitter staccato notes, panicked cries, breathlessly rushing arpeggios, and wailing sirens. After this superbly organised cacophony, it’s a relief to find on “Ending” that Kojima can do “upbeat and hopeful” just as well as conjuring images of apocalyptic space battles. Instrumentations don’t change much, but the mood is entirely different, contently looking back upon the adventure amidst memorable, densely arranged pop melodies. The relaxed yet still sweeping composition once more underlines the soundtrack’s ambitions. As the Virtual Boy’s greatest score, this isn’t just a mere historical curiosity, but one of the greatest chiptune shoot’em up soundtracks ever written.