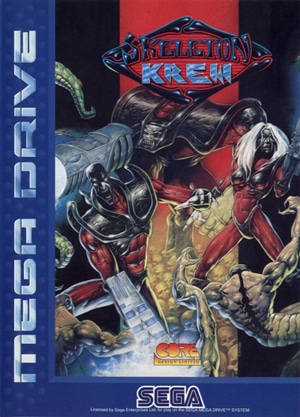 And then there were the soundtracks. For the Amiga CD32 version, Martin Iveson composed a jazz/trip-hop score, mirroring what was en vogue in contemporary music when Skeleton Krew was in development. The soundtrack for the Genesis port went for a more esoteric approach. It was written by Nathan McCree, who just came off Star Wars homage Soulstar. Now he would deliver a work that was almost the complete opposite to that earlier game’s busy orchestral sounds. Given the time of Skeleton Krew’s release and its genre, one might have expected an industrial metal or techno score. Instead, McCree goes for something very different: glitchy, dark ambient compositions, a genre that’s immensely difficult to pull off successfully, particularly on a technologically limited platform like the Sega Genesis. As such, McCree’s work is almost unique among 16-bit soundtracks.

What the Skeleton Krew soundtrack seeks to achieve isn’t a rush of adrenaline, but instead a very specific mood: oppressive, crawling with fear and paranoia, yet energised by a sense of forward movement that prevents the music from becoming too static and suffocating. McCree builds most of his compositions around minimalist combinations of synth pulses that can function as ostinati or short melodic motifs. “Opening Theme” sets the template for the entire score, with its lugubrious synth ostinato forming the base for other ostinati building on top of it. Locking into complex rhythmic layers, these pulses create a surprisingly sound collage-like composition that isn’t afraid to venture into thorny, dissonant episodes. 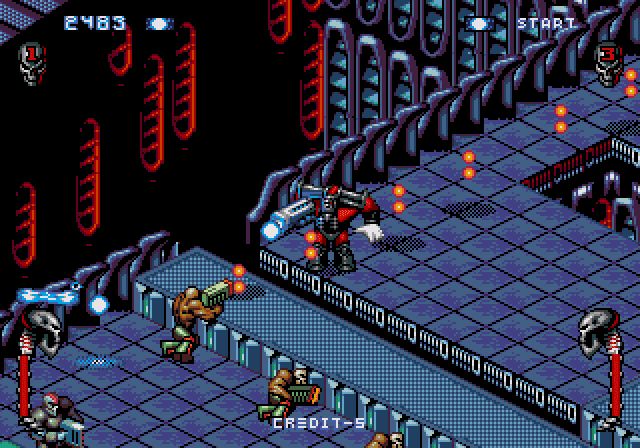 To deliver its full atmospheric impact, this kind of music requires immense attention to detail from the composer, and McCree certainly delivers. Firstly, the Skeleton Krew soundtrack is one of the best-sounding Genesis scores – sample those ground-shaking bass synth pads on several tracks that open up like black holes to swallow the music wholesale, belying the soundtrack’s usually low-key nature. Also, few 16-bit scores make such fastidious use of the stereo field. McCree spreads his instruments across the full width of the stereo soundscape, achieving an immense sense of space and scope – but more importantly, he disorients listeners, with his synth pulses moving unpredictably from speaker to speaker.

There are other ways in which the Skeleton Krew soundtrack keeps listeners on edge. On several tracks, McCree uses two ostinati as the foundation of the composition – one playing on the left stereo channel, one playing on the right. “Stage 1: Monstrocity” beautifully demonstrates the results of this technique. At times, those two synth pulses run alongside each other in different metres, creating the sort of counterpoint that rhythmically destabilises the cue while also being the only thing that holds it together. On other occasions, McCree has the two pulses playing almost, but not entirely, on the same beat – the two layers remain tantalisingly out of sync and perplexing. The result is a subtly nagging feeling that something’s not quite right with the piece’s foundation, but it’s difficult to put the finger on what exactly turns the music disconcerting. 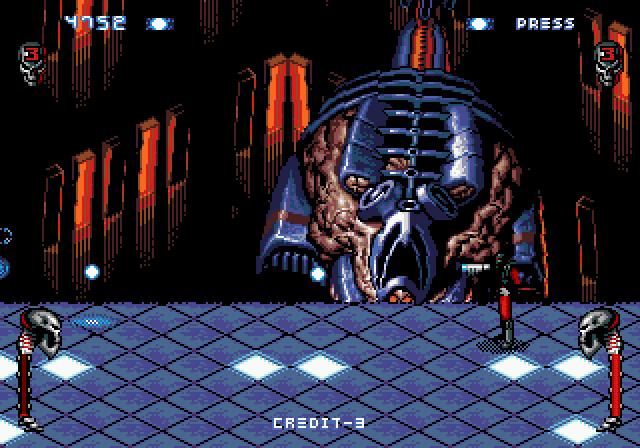 The various ways in which McCree configures the Skeleton Krew soundtrack’s rhythmic layers accounts for much of its appeal. “Stage 5: Venus” maintains interest through its markedly jerkier, more syncopated base rhythm. It then adds two racing pulses on top of a grating synth figure to take the music’s rhythmic complexity and resulting disorientation to a new level. Final level track “Stage 6: Kadaver’s Base” raises the bar further with wandering synth pulses that uncomfortably rise in pitch before they clash in the score’s most aggressively competing rhythms. Even so, the music never breaks into obvious theatrics – instead, it just keeps building its atmosphere of dread, patiently and relentlessly. On other occasions, McCree opts for a more outwardly forceful approach – for example when “Stage 3: Sewer Duct” merges techno elements into the score’s mood-driven template before culminating in almost unbearably shrill dissonances.

The Skeleton Krew soundtrack manages to captivate not just because of its clever use of minimalist rhythms and timbres but also because it creates such a potently dystopian atmosphere. Forlorn, melancholic synth pads ebb and swell through these cues like roving searchlights in the abyss – at times, the score plays like a sombre, twisted step-brother of Vangelis’ Blade Runner. “Stage 4: Mars” may be the soundtrack’s most ambient track, but it’s also intensely poignant, its swooshing sound effects evoking solar winds blowing in the utterly lonesome depths of space. “Stage 2: Elevator Shaft” makes more unsettling use of machine-like sound effects as they gnaw away at the fabric of the cue, which sounds more insecure than ever before.

None of these cues overtly tug at the heartstrings. Still, with the same consummate subtlety that governs the entire score, McCree ensures that the music is a cerebral experience and an emotional one. There’s nothing noisy or shouty about the Skeleton Krew soundtrack, but maybe that’s why it leaves such an indelible mark.