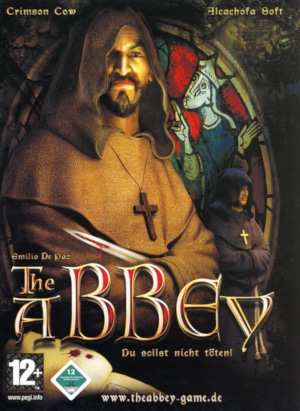 A murder in a Medieval monastery? A wise monk, accompanied by a young, inexperienced companion, investigating the crime? It’s hard not to assume that The Abbey’s plot was more than a bit influenced by Name of the Rose. Then again, it’s an intriguing, still original enough set up for an adventure game. The Abbey wasn’t as well-received as Name of the Rose though, with reviewers handing out mostly middling scores.

Where The Abbey differed most clearly from its obvious inspiration was in its surprisingly sumptuous soundtrack. James Horner had scored Name of the Rose with a low-key, largely synthetic soundtrack that divided film music fans. The The Abbey soundtrack takes an almost diametrically opposed approach. The score utilises a full live orchestra, organ and two choirs (male and boys) to create the sort of gloriously melodic bombast one would expect from a historic movie epic, rather than from a relatively obscure adventure game. The surprise is even greater when one considers that composer Emilio de Paz wrote this outstanding score while also working on The Abbey as project leader and lead designer.

From the start, de Paz leaves little doubt as to where he is planning to take the The Abbey soundtrack. Once opening track “In Memoriam” begins with sweeping string and choral statements, it’s obvious that de Paz is going to milk the game’s religious themes for all the melodrama that they’re worth. “In Memoriam” also establishes the The Abbey soundtrack’s main thematic idea. In a clever take on musical tradition, de Paz appropriates the centuries-old Dies Irae motif – most befitting the game’s setting. But after quoting its opening notes, de Paz deviates from the traditional melody and guides his theme upwards. Harnessing its obvious ecclesiastical connotations, de Paz’ theme is a memorable idea that will return on several tracks. These include “God’s Domicil”, “Embracement of the Night” and “Kingdom of Dead”.

What’s crucial to the success of the The Abbey soundtrack is its endless stream of lushly glowing melodies. In fact, it’s no hyperbole to say that this is one of the most melodically beautiful orchestral  game scores ever written, with a warmth radiating from its melodic statements that you don’t often hear. Witness how “God’s Domicil”’s weighty yet graceful nobility manages to paint a most intriguing picture of the location it underscores. Founded on ages of accumulated wisdom, there is grandeur here as much as the reassurance of safety found in knowledge. Equally subtle and multifaceted is “Abbot’s Theme”. Both the lead character’s gravitas and his more light-hearted side register, thanks to quiet church organ leads, charming woodwind melodies and an impassioned, violin-backed climax.

de Paz is obviously aware that a successful epic needs to draw upon more registers than just grandiosity. True, there’s no shortage of heavenly choirs and big orchestral gestures on the The Abbey soundtrack. But de Paz covers other emotional territory with just as much aplomb. For example, “Fire and Iron” carries the score’s melodic preoccupations into more period-specific terrain. A lightly scored medieval folk dance, “Fire and Iron” recalls the gentle busyness of the Anno game scores. One of the album’s prettiest pieces, “Benedicte Dominus” marries pastoral woodwinds with soothing choir, the idyllic with the monumental. Even more moving is “Healing Hands”, despite its brevity. 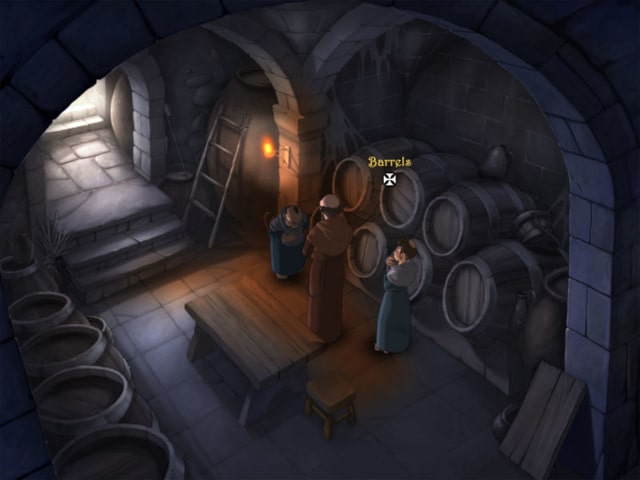 The Abbey being a medieval murder mystery, things inevitably turn dire at some stage. A chromatic cello line on “Embracement of the Night” introduces unease, which turns into outright horror on “Cadaver”’s sombre choirs. With the murder investigation and painstaking detective work under way, the The Abbey soundtrack expectedly moves into more subdued waters. However, de Paz manages this switch to more adventure game-typical music with ease and grace.

“Nazario of Milan” then returns the melodrama so prominent earlier on the The Abbey soundtrack, now more crepuscular than before. “Blaze in the Heart” harkens back to “In Memoriam”’s biblical bombast and at times fury. And with emotions all heightened now, “Requiem” takes the album’s arc to its peak. A beautifully impassioned string adagio, “Requiem” opens with a reprise of the Dies Irae-derived motif on solo violin. The composition then dives headfirst into a near-operatic outpouring of emotions, with string melodies that mourn, suffer and proudly rise in a way that epitomises the album’s best melodic qualities. A violin outcry that thematically recalls a similarly emotional outburst on “Abbot’s Theme” is the composition’s most memorable moment.

Finally, closing track “The Abbey Suite” successfully recapitulates the soundtrack’s thematic and emotional threads in one seamless composition that plays like a concert overture. It’s the perfect close to what might be game music’s most obvious love letter to the heart-on-your-sleeve melodicism of classic Golden Age movie soundtracks.