Roberts’ vision for Wing Commander was to create a full-blown space opera à la Star Wars. The orchestra intro in Wing Commander shows that Roberts knew how hugely important music was for his dream project to play like a swashbuckling space opera. The intro also serves as a curtain raiser that heightens expectations. The show is about to start, and it’s going to be of grand proportions. And of course, the sight of the orchestra announces the composers’ symphonic ambitions – a rarity for a 1990 video game. Rarely has a 25-second game intro carried so much meaning and context.

It no surprise then that Roberts asked for the Wing Commander soundtrack to emulate Star Wars, as well as Jerry Goldsmith’s Star Trek: The Motion Picture. While this sounds obvious in retrospect, in 1990 such lofty aims weren’t common for a game score. On gaming platforms available outside of the Japan, the introduction of the Roland MT-32 module had only relatively recently made it possible to convincingly mimic orchestral instruments.

It’s safe to say that in its pursuit of movie-inspired leitmotivic structures, the Wing Commander soundtrack was a ground-breaking effort – possibly the first game score to attempt such tightly-wound thematic integration. The soundtrack’s impact is still felt to this day, as orchestral game music’s aesthetics remain closely linked to film scores.

Of course, all these historic considerations wouldn’t count for much if the Wing Commander soundtrack wasn’t any good musically. Thankfully, George Sanger and David Govett succeed brilliantly at writing as close an approximation of a John Williams-style space opera score as 1990 chip synthesis would allow. Yes, the composers follow a formula, but they fill it with substance and individuality.

It all starts with the musical calling card of the entire Wing Commander franchise. Govett’s “Fanfare” is as heroic and boldly swaggering as one could hope for, perfectly realising the composers’ brief. Govett also finds time for a quiet mid-section with lovely woodwind melodies, before ramping up for the blazing finale. Most importantly for the realisation of its story-telling ambitions, “Fanfare” seamlessly moves through a multitude of moods, melodies and orchestrations to create music with a truly cinematic sweep. That Govett wrote this piece – and the main battle cue – in only two days is astonishing.

And yet there’s more to how the Wing Commander soundtrack fashions itself after the great works of film music. Govett and Sanger’s thematic work here is outstanding, as they find ever new ways to incorporate the fanfare. For a 1990 game score, the composers’ consistently skilful and multi-faceted manipulation of the theme is quite extraordinary. In fact, Wing Commander easily holds up in its thematic complexity and consistency against today’s single-theme game soundtracks. 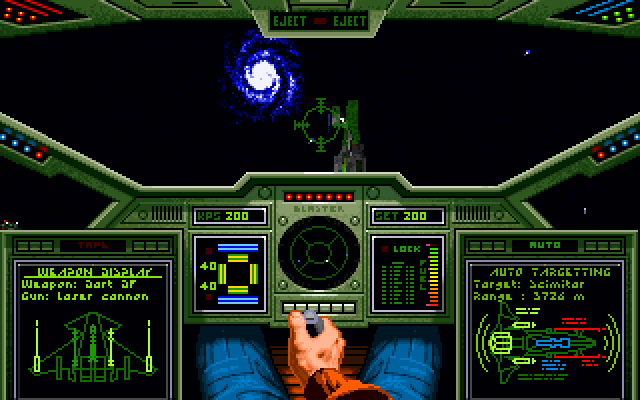 Of course, it helps that the fanfare is malleable and melodically strong enough to weather its many repetitions gracefully. Whether the theme returns on a lone bugle on “Funeral”, makes a surprisingly wistful appearance as a surf rock live performance (!) on the score album, or faces off against enemy musical forces on the roller coaster “Combat Full / Returning Defeated” – the melody’s omnipresence gives the Wing Commander soundtrack an admirable coherence.

That’s not to say the fanfare is the only provider of melodic ideas on this soundtrack. Far from it – even on tense militaristic underscore like “Commander’s Office” that in lesser hands would invite a half-hearted composing effort, Govett and Sanger’s music has sufficient melodic backbone to emotionally involve listeners. The fact that almost all of Wing Commander’s compositions feature at least one strong melody is crucial. While many pieces run for less than one minute, they still feel worthwhile because of their engaging melodies. What also helps to make this collection of often brief tracks palatable is the clever album sequencing. Tracks are combined into smoothly flowing larger constructs and it’s impressive how this gives even shorter pieces a place within the album arc, ensuring that the game’s cinematic storytelling ambitions register with full force. From Wing Commander onwards, game and film scores would be inextricably intertwined. Now the challenge was for game music to gain inspiration from its older cousin, rather than to just imitate it.

Out of the many Wing Commander ports, the 1992 FM Towns release has arguably the best version of the score, surpassing the PC soundtrack. Prepared by Origin’s Nenad Vugrinec, the FM Towns score is a faithful adaptation of the existing material, only adding some flourishes like snare drums on a few tracks. The synths Vugrinec deploys for Red Book playback are more life-like than those used by the Roland MT-32, although it’s not a quantum leap. What makes the FM Towns version of this score feel significantly bigger and more dramatic is the fact that it places the instruments in far more spacious, vibrant acoustics – exactly what you would want for these cinematic compositions.

Other ports of the Wing Commander soundtrack don’t fare as well as the FM Towns conversion, even though they stick to the original score’s material (apart from the Sega CD game).

The 1992 SNES port is a massive wasted opportunity. During the time of Wing Commander’s release, the Roland MT-32 was already beginning to show its age. SNES titles like Yuzo Koshiro’s Actraiser, released only three months after Wing Commander, showcased the SPC700 sound chip’s potential for more realistic sample playback. Unfortunately, the SNES conversion makes no use whatsoever of the platform’s reputation as an orchestral powerhouse, merely contend to replicate the sound of the PC synths. And when there are changes in instruments or timbres, they are usually for the worse, sometimes sounding downright obnoxious.

More successful was Wing Commander’s Amiga port. No, it doesn’t replace or build upon the PC soundtrack in any way. However, considering that the Amiga’s audio strengths didn’t lie in replicating orchestral sounds, this conversion does an admirable job at translating the score’s cinematic ambitions – even if the orchestral hits sound fairly piercing.

The 1992 Sega CD port is an intriguing case. It entirely discards Sanger and Govett’s score, coming up with its own material – even its own main theme. The score makes use of Red Book audio only for five tracks, three of which have voice samples layered on top. The remaining two compositions are excellent – densely orchestrated affairs that are more swashbuckling and less militaristic than the original score, but nevertheless expertly crafted and arguably more colourful and complex than Sanger and Govett’s work. Unfortunately, the remaining underscore is not available through game rips, but gameplay videos suggest compositions that are far less elaborate and sophisticated, and the samples don’t sound any more realistic than the 1990 score.

An even stranger case is the 1994 3DO conversion titled Super Wing Commander. The game was a significant graphical upgrade of the original Wing Commander, using a new engine that deployed polygons rather than sprites. The midi orchestrations however are actually a step down from the 1990 game, with some bizarre instrument choices. That glassy, thin synth lead on “Fanfare” sucks just about any sense of excitement and adventure out of the composition. The result is a score that sounds woefully underpowered, and the mediocre new material written for the game doesn’t help things.