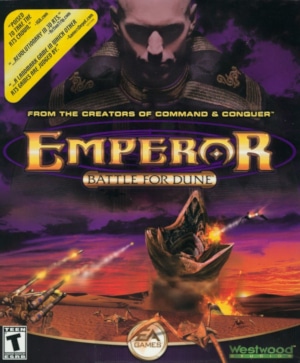 Things were more interesting on the music side of things. Emperor: Battle for Dune featured the same three factions as Dune 2000 had a few years earlier: House Atreides, Harkonnen or Ordos (the latter a non-canon addition to the Dune universe which allowed the developers to add some variety to their games). And as on Dune 2000 – and of course the Command & Conquer titles – RTS game music superstar Frank Klepacki was drafted to write the soundtrack. However, this time Westwood requested a distinct style of music for each house. That effectively tripled the workload, so Klepacki brought in additional composers he had worked with in the past – David Arkenstone and Jarrid Mendelson. Arkenstone had collaborated with Klepacki on Lands of Lore: Guardians of Destiny and Lands of Lore III, while Mendelson had made crucial contributions to one of the Command & Conquer franchise’s most unusual entries – Tiberian Sun.

With the composers working independently from each other (apart from copies of Klepacki’s previous Dune scores for inspiration), the result was a massive three-hour soundtrack, each faction receiving one hour of characteristic music. Klepacki scored House Atreides with relatively straightforward (synth)orchestral, cinematic fare – no genre mash-ups à la Command & Conquer to be found here. Meanwhile, Arkenstone concocted a more aggressive, hard rock/metal music style for the Harkonnen – surprising fans of his gentler, fantasy-themed works. While their approaches differed, neither composer managed to distinguish their music from similar game scores, trading in genre stereotypes that couldn’t carry the fairly lengthy compositions. Ultimately, Mendelson brought the most creativity to this assignment – maybe helped by the characterisation of House Ordos as treacherous strategists whose music required a “strange, out-of-this-world alienness”, according to an IGN piece on the Emperor: Battle for Dune soundtrack. 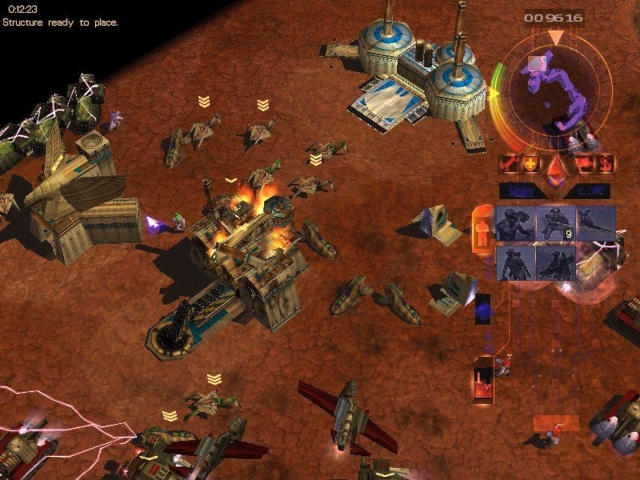 Mendelson had already proven his compositional abilities on Command & Conquer: Tiberian Sun. But while that 1999 score was an all-electronic affair just like Mendelson’s portion of the Emperor: Battle for Dune soundtrack, the latter game still sees the composer taking a different tack. Tiberian Sun surprised with its masterclass in understated writing that oozed an ambience heavy with dread and paranoia. Battle for Dune takes a more traditional approach for an action-heavy RTS game, while still yielding creative and surprising results.

In short: Mendelson deploys a consistently maximalist formula here, penning densely layered electronic compositions that can be outright bracing in their intensity, irregular beats and liberal use of dissonances. The outcome is music that feels both suitably grand for a war game, yet edgy and unsettling enough to tweak genre conventions. It does not make for easy listening – but it’s also the first franchise soundtrack since Stéphane Picq’s Dune to come up with a musical underscore that’s fittingly creative to capture the otherworldly nature of Dune. Mendelson’s music certainly creates that “out-of-this-world alienness” he had been asked to conjure. Picq’s work had evoked rich moods that one may describe in similar terms, but Mendelson’s compositions express that kind of atmosphere through far more aggressive music.

The Emperor: Battle for Dune soundtrack’s most brazen compositions kick off Mendelson’s section of the score. “Not an Option” is a mutant march thanks to pounding beats backing twitchy melody fragments that nervously oscillate through Dune’s night skies. The cue’s martial disposition is tempered through calmer sections that still vibrate with nervous tension, as well as foreboding synth leads. 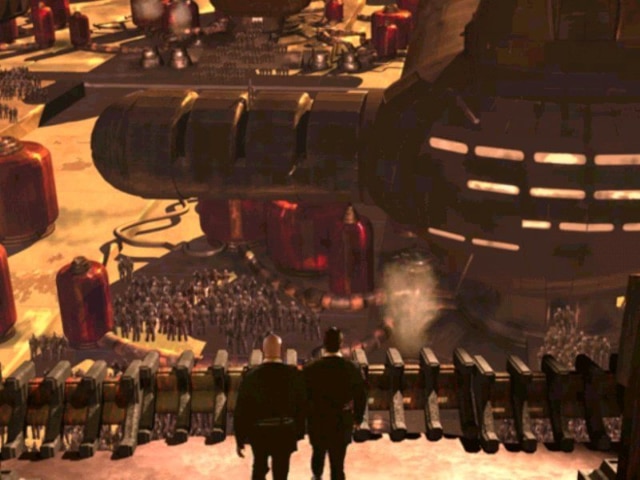 Mendelson’s knack for astonishingly intricate, ever-changing electronic layers is as apparent here as on whirlwind “The Strategist”. A grating, circular melody lead winds its way past distorted bass pads and hyperactively buzzing electronics, turning the cue into gaming’s most elaborate crisis track thanks to the melody’s alarm-like nature. Despite its industrial groove, fierce dissonances and the endlessly repeating lead leave the cue continually teetering on the brink of implosion. As it piles up a staggering amount of ideas and musical details, “The Strategist” seemingly effortlessly achieves the epic effect that Klepacki and Arkenstone’s music strains for, while never remotely succumbing to cliché.

Other tracks are less hyper-charged, more concerned with underscoring the Ordos’ weirdly techno-ethereal, icy nature, as well as their calculated, machine-like approach. A trio of compositions – “House Ordos”, “Ghola” and “Executronic” – open up huge cavernous spaces, filled with gigantic, glistening machines whose myriads of gears relentlessly grind against each other. As on Tiberian Sun, Mendelson’s handling of atmosphere here is masterful. He achieves a fascinating sense of eerie beauty and splendour, while tantalisingly keeping the alien objects inspiring such awe out of reach – witness how “Executronic”’s majestic portions repeatedly relapse into experimental beats. Later on, “Dream of the Executrix” turns these compositions’ surreal mood into an outright nightmare, mixing in chopped up, screaming electric guitars into the cue’s tapestry of uneasily meshing electronics.

Of course, the Emperor: Battle for Dune soundtrack doesn’t stray too far from the battlefield, but as you would imagine, Mendelson doesn’t deliver straightforward battle cries. A cue like “Deception” advances methodically and with unsettling determination, while the whiplash transitions of “Sabotage” maintain the score’s constant feeling of threat amidst the quirkiness of its manifold layers. “A Plan of Attack” features a surprisingly lean arrangement, built almost entirely around the track’s knotty rhythms, while “Ordos Control” and “The Specimen” trade displays of firepower for a hauntingly atmospheric pull. And when Mendelson finally does pen a war anthem with “Infiltrators”, its rhythmic choral synths, pounding drums and anthemic beats are still interrupted by the score’s most mumbling, minimalist interlude. In Mendelson’s capable hands, Battle for Dune turns into an unpredictable descent into a dream-like, raging underworld of innovative game music electronica.