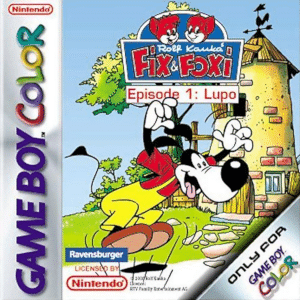 One day, historians will determine how many hundreds of licensed platformers were released for the Game Boy and the Game Boy Colour. Then again, we might never know the exact number – the market share of both platforms was so large that even local releases promised commercial success. Case in point: Fix & Foxi – Episode 1: Lupo (and no, there was no second episode, so maybe things didn’t turn out as planned). The game was based on an animated TV series, which in turn was an adaptation of a weekly German comics magazine first published in 1953. The magazine ran for decades and boasted a circulation of several hundred thousand per week at the height of its success. Of course, abroad the two anthropomorphic foxes and their friend Lupo weren’t particularly well-known, so this Game Boy Colour title remained an obscure Germany-only game.