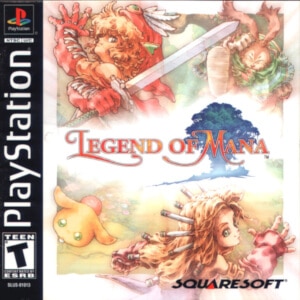 While the 32-bit generation saw a seismic shift in gameplay and graphics design from 2d to 3d, that didn’t mean nobody created pixel art masterpieces during those years. And given how much Square’s 16-bit games had pushed the envelope in the early 1990s, it only makes sense that the company would occasionally return to the art style that had endeared its products to countless gamers. Square’s major forays into 2d gaming on the PS1 were SaGa Frontier 2 and Legend of Mana – and it’s probably no coincidence that Square veteran Akitoshi Kawazu produced both games. That probably also explains the non-linear style of RPG gameplay both games tried to pioneer. However, while the lack of a robust central narrative was typical for the SaGa games, it set Legend of Mana apart from its franchise predecessors, reaping strongly divided feedback from gamers and reviewers alike.