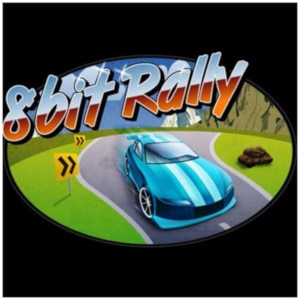 The 8-Bit Rally soundtrack differs most obviously from the Lotus and Top Gear scores in its melody-driven nature. One listen to opening track “Renegade Racer” confirms that poisoncut is more willing than Barry Leitch and Patrick Phelan to hit listeners hard and fast with catchy melodies. Combine this tendency with heavier beats and 8-Bit Rally’s music is deliciously in-your-face and fuss-free. poisoncut’s melodic chops are evident throughout the album, as he serves up both memorable hooks and more long-winded melodies. The latter are also introduced on “Renegade Racer”, as a measured synth melody powerfully unfolds on top of pumping beats. It’s a perfectly judged combination of contrasts. Insistent, beefy beats deliver the necessary speed rush, while the determined melodies tell players that they are still in control of the frantic racing action around them, ready to capture first place. 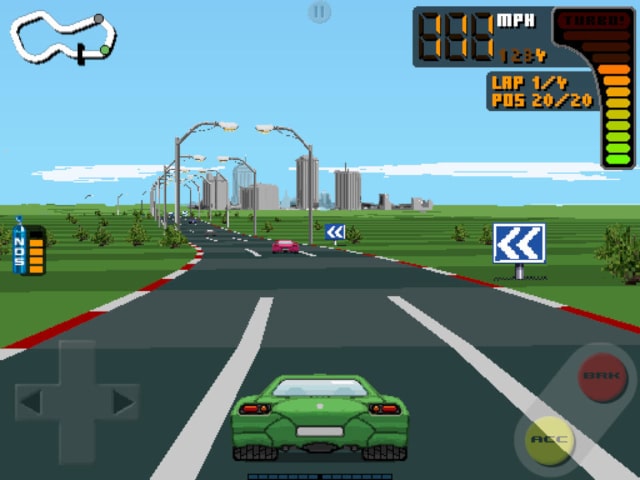 It’s a strategy that poisoncut deploys throughout the album to predictable but always great effect. Just take second track “Midnight Diversion”. The Lotus and Top Gear franchises have always excelled at this sort of nocturnal racing music – take Lotus Turbo Challenge 2’s “Night” or “Las Vegas” from Top Gear, maybe the franchise’s defining moment. What poisoncut delivers is just as fantastic, his chrome-polished, sleek melody an irresistible stadium filler ready for 1980s chart action. The self-assured way in which poisoncut presents his melodies cements his pop credentials. Always given enough room to breathe and to make their mark through repetition, these melodies never outstay their welcome either, each track moving seamlessly onwards. And it’s never a monotonous rush, as cues rise and fall in intensity with pinpoint precision and to maximum effect.

Apart from its melodic one-two punches, what makes the 8-Bit Rally soundtrack so supremely entertaining is its variety. Without fail, poisoncut responds to each location’s character – not always in surprising terms, but always with verve and enthusiasm. It’s here that 8-Bit Rally surpasses its musical progenitors. poisoncut’s work is more responsive to its locations than the Top Gear games. Equally, 8-Bit Rally‘s tracks are more developed than the short racing cues of the Lotus franchise. For example, “Space Drive”’s opening arpeggios hint at a melody rather than exposing it, preparing the track’s more ethereal nature. Once the lead melody comes in – bubbly and a bit dreamy – “Space Drive” becomes unexpectedly and delightfully playful. Listen to the lead melody’s echoing notes, which trigger small, unpredictable cascades of shooting stars. 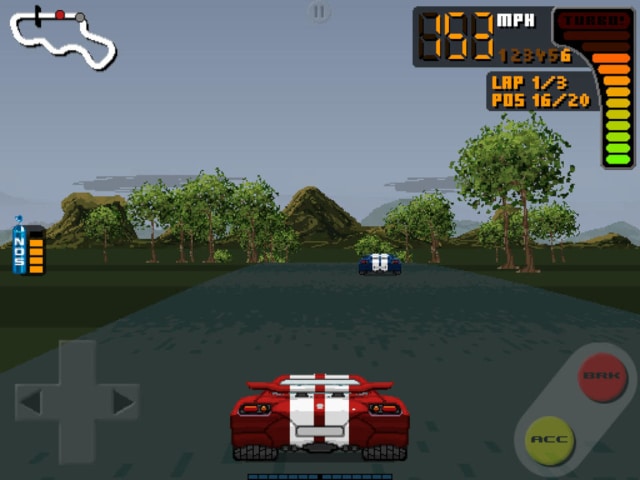 The 8-Bit Rally soundtrack knows how to pace itself and so “Space Drive”’s levity segues into “Phantom of the Road”’s grimy bass beats. Fuzzy around the edges and disappearing in the haze, the track’s rhythmic foundation adds to the music’s eerie mood. A nagging synth pulse attacks an expectedly thin, lonely lead – and then, the album’s most melancholic melody turns the self-confidence of previous tracks inwards, but still maintains their head-nodding, catchy progression. It’s moments like these that showcase poisoncut’s ability to manipulate moods while keeping the album as a whole musically coherent.

That even applies to the moment when “Phantom of the Road” gives way to “Distant Journey”’s irresistible sugar rush. Taking its cue from 90s techno – in the best possible way – “Distant Journey” hammers home its Major-key enthusiasm with the album’s most memorable melodic idea. It’s the perfect, carefree environment to introduce 8-Bit Rally’s first chiptune elements, a joyful shout out to classic game music. And then the music reaches for the stars as “Distant Journey” soars even higher, its euphoria exploding and rushing through the solar system at warp speed.

It’s for the end of the 8-Bit Rally soundtrack that poisoncut reserves his most creative concoction. “Miles of Funk” is a fascinating track, both retro-inspired and futuristic in its take on funk music. Opening with a down-and-dirty, strutting bounce, “Miles of Funk” heads to the after-race party with some wild, temperamental chiptune soli. At the same time, its confidently grooving rhythms and more traditional melodic material anchor it in funk’s classic, effortless cool. Not to mention that “Miles of Funk” is just as supremely danceable as the rest of the album. It’s the perfect close to an album that builds on past musical styles rather than simply trying to mimic them.