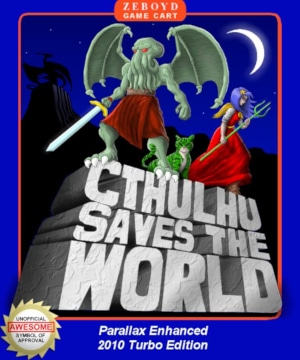 With the rise of indie games, the number of 8- and 16-bit styled titles has exploded. One of the most beloved genres from that era in gaming were JRPGs. It’s no surprise then that the retro game market has been flooded with titles that try to recapture the magic of genre classics like Final Fantasy, Dragon Quest, Star Ocean, Tales of… the list goes on and on. One of the better JRPG throwbacks was Zeboyd Games’ Cthulhu Saves The World. For the game’s soundtrack, Zeboyd Games turned to Gordon McNeil.

McNeil had provided a couple of tracks to Zeboyd Games’ earlier Breath of Death VII: The Beginning. His contribution to Chtulhu would be significantly larger, clocking in at more than 70 minutes of music. McNeil’s stylistic approach to scoring this hybrid parody/homage was unsurprising. In his words: “Since I was a tod I’ve wanted to score an RPG of the J variety, so I jumped at the chance. The whole idea behind Zeboyd’s RPGs is to make as much an honest tribute as well as parody, and so I decided to go whole hog and put together as iconic a JRPG soundtrack as I could.”

Indeed, like the best parody scores, McNeil plays things entirely straight, never pushing the music to sound overtly jokey or self-aware. More importantly, McNeil manages to pen what indeed has every right to be called an iconic JRPG score. This might be Western game music’s best retro RPG score, the very rare example of a throwback soundtrack that is every bit as great as the classics that it references.

Listeners will know they’re in good hands from the moment opening track “Save the World (Hero Theme)” kicks in. Beautifully layered brass fanfares prepare the ground for a wonderfully enterprising, youthful French horn theme. With its refreshing swagger, the composition captures the requisite sense of adventure to perfection. Like most JRPGs, the Cthulhu Saves The World soundtrack liberally mixes classical and rock/pop influences. And “Save the World”’s lead melody certainly embodies the score’s mastery of both those genres. Beautifully developed and long-winded, the cue’s theme equally has the repetition and immediacy of a great pop tune.

While McNeil integrates rock elements into the orchestral ensemble consistently well, one aspect of this genre fusion deserves particular mention: the outstanding rock drum work. In fact, McNeil’s writing for the instrument is more creative than what you’d hear on most rock/metal game scores. Take “Conquer the Fire (Volcano)”’s fantastic variety of drum fills and rhythm changes. They help push the piece to one of the soundtrack’s most goosebump-inducing moments, when a magnificent, skyscraping string melody again combines classical gravitas with pop music’s catchiness.

As an exercise in pastiche, Cthulhu Saves The World necessarily follows genre tropes, but it always does so to perfection. Expect a peaceful town theme? That’s precisely what “A Moment of Clarity (Town)” delivers – no surprise here. However, with such gorgeous woodwind melodies atop acoustic guitar chords and warm string backing, there’s no reason to complain. And again, McNeil doesn’t fail to develop his composition, transitioning into a romantically swooning B section led by solo piano. 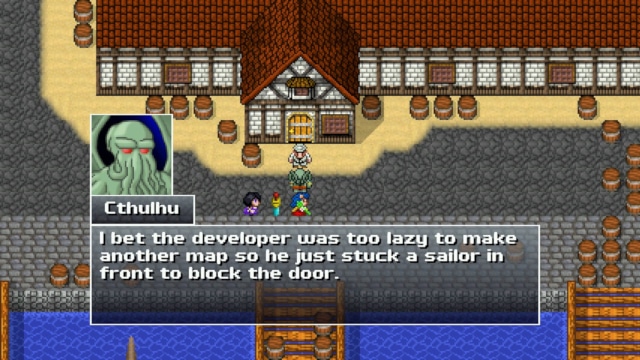 Other locations are scored as predictably and with just as much outstanding musicality. “Rust and Scrap (Factory)” is a junkyard stomp that mixes playfully industrial rhythms with clarinet leads and harpsichord riffs. “Into the Depths (Shrine)” opens with deep male choir, in its obviously synthetic nature a charming throwback to PS1-era soundtracks. One of the soundtrack’s most beautiful brass melodies – solemn yet aspiring – befittingly underscores this ecclesiastical location. And finally, mighty electric guitar riffs come rolling in to complete this picture of a mysterious, awe-inspiring place.

No classic RPG score would be complete without strong battle themes. Not surprisingly, the Cthulhu Saves The World soundtrack excels here as well. McNeil brings to bear his penchant for complex, dense instrumentations on these adrenaline-charged compositions. “Conflict (Battle)” is yet another track that seamlessly merges classical and rock (or rather metal) styles. Hugely energising, “Conflict” never lets up, but at the same time knows how to pace itself. Witness how its lighter piano lead is impeccably timed after strings, choir, guitar and drums have taken the track’s intensity to its peak.

And what of the big finale? A six-minute miniature epic, “Existence Collapses” lets McNeil pull out all the stops – metal riffage, prominent choir and organ, show-stopping trumpet soli, fists-raised-to-the-sky orchestral drama. Of course, he combines it all perfectly to write a final boss track for the ages. “Existence Collapses” fully earns the hyperbole that its title promises and cements the status of the Cthulhu Saves The World soundtrack as a genre classic that surpasses far more prominent JRPG throwback scores like Octopath Traveler or Bravely Default.