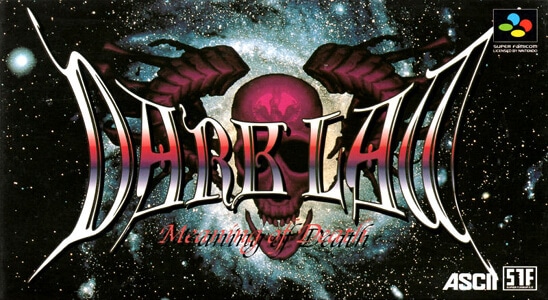 To craft the game’s soundtrack, Sakata SAS hired a team of game musicians going by the name of Target Laboratory. Led by veteran composer Yusuke Takahama, Target Laboratory had been active since the mid-1990s. Four of its members worked on Dark Law – Takahama himself as sound producer and Nobuo Horie on sound effects, while Satoshi Nagano and Michihiko Shichi handled composing duties. Both artists – fairly new to the industry – had collaborated on previous Target Laboratory projects such as 1995’s Kat’s Run: Zen-Nippon K Car Senshuken and Tokimeki Card Paradise: Koi no Royal Straight Flush. Nagano’s career seems to have trailed off after a few more Target Laboratory games. Shichi joined developer Omega Force and became sound designer and director of their Samurai Warriors and Dynasty Warriors franchises – before joining tri-Ace and sound directing high-profile titles such as the later Star Ocean games and Resonance of Fate.

Despite all of this, the Dark Law: Meaning of Death soundtrack remains both artists’ crowning achievement as composers. In tune with the game’s overall aesthetic, Nagano and Shichi unearth an unusual yet fascinating approach to scoring an RPG.

Firstly, there are of course the kind of lushly orchestrated pieces one would expect in an RPG – but these compositions are sculpted with exceptional attention to detail and a convincing flair for atmosphere and instrumental colours. Admittedly, “Temple Forest”’s serene flute melody is less than surprising and invites exploration of the verdant surroundings. However, the flute lead’s unexpected melodic turns and trills against silvery layers of plinking percussion evoke a beguiling mood of mystery, with a hint of haunted depths hidden behind nature’s idyll. “A Death Occurs”’ emotional strains – expertly composed, heavy-hearted string lines – suddenly and effectively swap places with a bouncy flute melody. And “Scenario Clear” segues beautifully from relaxed flute and string tones to a delightful B section for glockenspiel and harp accents – before arriving at a church organ solo over warm plucked bass.

The Dark Law: Meaning of Death soundtrack truly shines though when it mixes genres like maybe no other SNES game. Perhaps not surprisingly, “Ending Credits” best sums up Nagano and Shichi’s vision for the game’s sound, combining rock drums and metal guitar riffs with slapped funk bass, chiming synths and church organ leads. The closest comparison for this eclectic mix would be the Castlevania franchise’s signature sound – and it’s a mark of this score’s quality that it stands toe-to-toe with that hallowed series’ strongest efforts.

The one element that comes to dominate the genre-benders found on the Dark Law: Meaning of Death soundtrack though is what might be the SNES’ heaviest, most convincing metal guitar riffs and drumming. To be clear: this is not the melodic, high-speed metal usually found on game soundtracks that dabble in this particular genre. Instead, Nagano and Shichi opt for much slower, doom-laden riffing that recalls early 1970s Black Sabbath (a fitting musical match for a game with this sort of name).

These hammering riffs and pummeling drums relentlessly push a track like “Boss Battle” forward. Meanwhile, an incoming thunderstorm of synth effects swirls around the pounding rhythms and a grimly determined organ lead. However, what’s remarkable is how Nagano and Shichi mix in metal elements not to simply energise the music. Instead, they use metal’s suffocating heaviness to create mood pieces and build the score’s unmistakable atmosphere. Take “Fangi Forest Temple”, which prepares the entrance of its thundering guitar riffing with acoustic instrumentation such as chromatic string lines and an acoustic guitar solo. It’s ‘forest music’ as you would expect to find it in an RPG of the era, before the track’s metal stylings take the cue into uncharted territory without destroying the carefully created ambience.

Even more intriguing are those tracks on which the Dark Law: Meaning of Death soundtrack reveals its final trump card: clever use of electronics. Look closer at the game’s cover art, and you’ll see a skull floating in front of a swirling galaxy – and Nagano and Shichi’s music replicates that evocation of cosmic, unfathomable forces at work. “South Creek Ruins” introduces a subterranean, strikingly heavy synth bass lead whose nature is difficult to grasp – it’s somewhere between a drone, a pulse and a voluminous, stretchy melody lead. In other words, it’s as inscrutable as the powers hinted at in Dark Law’s artwork. The same bass returns on “Sealed Cave”, where it powers the track’s single-minded aggression and focus, while on “Good Ending Sequence”, it never allows the triumphant orchestral strains to dominate proceedings entirely. It’s another element that makes this score such a surprising, arresting work.