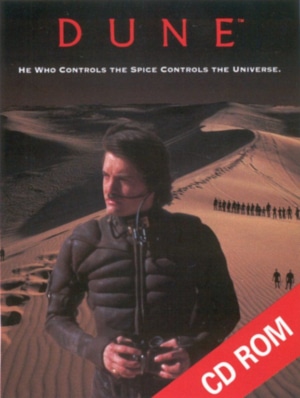 It feels like early media adaptations of Frank Herbert’s sci-fi epic Dune were doomed to run into equally epic troubles during their production. There’s, of course, the convoluted story of how Dune finally reached cinema screens in 1984 after more than a decade of failed attempts, only to disappoint at the box office and alienate its director. The first video game adaptation of Dune equally struggled to actually see the light of day – to the point where publisher Virgin Games cancelled the game (and launched the development of what would become Dune II), only to find out later that Cryo Interactive had secretly continued work on Dune. Thankfully, there was a happy ending to the story. Due to its innovative mix of adventure and strategy elements, Dune became a commercial hit, with 300,000 units sold by 1997, paving the way for Cryo’s expansion and prolific output throughout the 1990s.

In their assessments, contemporary reviewers put unusual emphasis on Stéphane Picq’s soundtrack for Dune. Picq’s work soon became part of game music history when Virgin Records released an arrange album titled Dune – Spice Opera. At this point in time, album releases of Western game music were nearly unheard of, so for a European game soundtrack to receive an arrange album was entirely unexpected. The work left its mark – when online game music criticism started to pop up in the late 1990s and early 2000s, Dune – Spice Opera garnered rave reviews for its unusual and creative aesthetics. It remains a fan favourite, its official release in Europe making it one of the first pieces of game music available for purchase by budding fans of the art form.

Thankfully, it is not just the arrange album that deserves such high accolades, but the source material itself is worthy of praise. Picq had been writing scores for several French PC games since 1988, making his debut for Cryo Interactive in 1990 on the company’s first game Extase. Dune was doubtlessly his breakthrough work, heralding him as an exciting new voice in game music (a reputation he would uphold on future works for Cryo).

His vision for the planet of Dune is far more psychedelic and less militaristic than that of Frank Klepacki and other composers on future franchise scores. What Picq creates is remarkably similar to what Frank Herbert achieved with Dune. More than any other work of science fiction before it, Dune conjured up a believable fictional world in all its complexity, described in painstaking detail. Similarly, Picq devises a soundtrack that takes its cues from existing (musical) cultures but then twists these into something unique – authentic world music (if the term is permitted here) for an imaginary planet.

Consequently, the Dune soundtrack is an exceedingly skilful combination of contrasts. Familiar electronic sci-fi soundscapes mesh with acoustic elements in calmly monolithic compositions. Their gently surreal nature aspires to the same kind of mysticism that Herbert used to heighten the book’s narrative scope and impact (the word “Opera” in the arrange album’s title is no accident, such is the music’s breadth). It’s tempting to say Dune’s woozy nature is only the natural result of a work whose story ultimately hinges upon the harvesting of a drug. However trippy the music may be though, it harnesses its heady inclinations to concoct compositions that are both spiritualistic and earthy.

The Dune soundtrack’s best demonstration of these qualities is “Chani’s Eyes”. The cue distils the score’s minimalist, yet tonally rich brand of synth ostinati, chiming melody fragments and synth interpretations of middle-eastern music into an entrancing example of Picq’s unique soundscapes. Crystallising the soundtrack’s undercurrent of melancholia and freezing it in time, “Chani’s Eyes” is the score’s calmest composition and truly a trip into outer space. On the other end of the spectrum we find “Free Men”. Now the music turns into a colourful, quirky tapestry of musical activity, including wooden percussion, flutes and a mysterious harpsichord-like melody. The whole construct is held aloft by synth ostinati that take unpredictable harmonic turns, fraying at the edges in the unforgiving desert heat. Again, Picq takes recognisably terrestrial music styles and adds just enough sci-fi synths to tweak them into something alien, yet still embracing.

It’s this intermingling of technology and ancient tradition, set to unusually languid tempi, that sets the Dune soundtrack apart from so many other 1990s sci-fi video game scores, at times evoking the now retro-futuristic mood of 70s prog rock. “Opening” sets the score’s peculiar mood early on. Both futuristic and warm, its organ-like opening chords give way to irregular, full-bodied electronic (heart)beats, wooden percussion and harsher synths that subtly shift from interrupting the almost religious atmosphere to finally complementing it. Music fit for an extraterrestrial cathedral, “Opening” establishes both the soundtrack’s drifting atmosphere and its immense scale.

Like a prayer, the music’s import isn’t diminished by its understated nature – and so a track like “Dune (Variation)” requires no overt sonic bombast to achieve grandeur. Underscoring the Arrakis palace, the cue feels appropriately weightier than other pieces, but that’s solely due to its heightened sense of foreboding and wistfulness, conscious of the expectations placed upon Paul Atreides as heir to the throne. Synth pads and melodies feel more yearning than usual before a flute solo’s lonesome nature drives home the point and effectively contrasts with the lusher synth sounds.

For a game that’s ultimately about conquering a planet, the Dune soundtrack doesn’t deliver much in terms of outright action music, but it’s not without more pressing moments. “Too” carries a greater sense of urgency in its mix of wooden and electronic ostinati, while a four-note synth melody underscores scouring the endless deserts of Dune in solitude. Suddenly, silvery arpeggios turn those endless dunes into an unexpectedly magical place, contrasting brilliantly with the arid atmosphere of the track’s A section.

World map theme “Wake Up” is the closest that Picq comes to writing a march on this score. He steadfastly builds the cue over snare drums and electric bass rhythms into a composition that encompasses both the constant onward drive of conquest and the sheer majesty of gazing from above at a vast world. It’s a sensation that the music communicates far better than the game’s visuals. Indeed, as far as sci-fi game soundtracks go, few have evoked the enticing spell of living in another world as potently as Dune.

Many of Dune’s ports ultimately didn’t eventuate, leaving only versions for the Amiga and the Sega CD. The Amiga port only includes three tracks, making it an inferior option by default – even though it includes a piece exclusive to this version (“Ecolove” – solid, but not a standout cue).

One might assume that the Sega CD port would fall back on the Red Book audio tracks from the Dune – Spice Opera arrange album, but that’s not the case. Instead, the game sticks to the original PC compositions, arranging them for the Sega Genesis’ YM2612 sound chip. The result is clearer and more forceful than what’s heard on the Ad Lib sound card version of Dune, which is most commonly referenced. However – as with the score’s Roland MT-32 version – more realistic and booming renditions don’t benefit music that thrives on its dream-like, hazy nature. As a result, Picq’s score feels heavy-handed and lacks that diffuse, all-enveloping ambience when rendered on a Roland MT-32 sound card or the Sega CD.