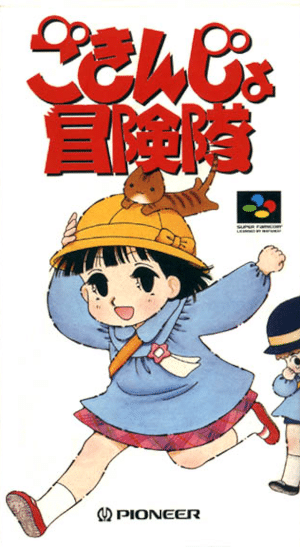 Approaching the end of his sadly short career – and coming off the creative triumph that was Mystic Ark – composer Akihiko Mori turns in another outstanding effort, once more expanding his stylistic palette while maintaining the strengths that had made previous works so outstanding. Given the game’s quirkiness and its kindergarten-aged protagonist, it’s no surprise that the Gokinjo Bouken Tai soundtrack is more overtly child-friendly than a magnum opus like Mystic Ark or a whirlwind action score like Shien’s Revenge. But this is children’s music done right – with just as much care for substance and attention to detail as any great work of art, regardless of genre.

The Gokinjo Bouken Tai soundtrack begins as you would expect. Mori had dabbled to some degree in pop-inspired, anime music-influenced styles on Wonder Project J, but Gokinjo Bouken Tai’s characters and settings see him delving deeper into this style of music here. “Title” welcomes listeners with a laid-back, jazzy opening before seguing into cheery Saturday morning cartoon theme song territory. “Let’s Go!” continues in the same vein, as a buoyant march that proudly prances along. Mori clearly takes the characters he writes for – and his audience – seriously. His symphonic sensibilities are just as much on display here as on his more ‘serious’ scores – they just shift to a different emotional register (and his melodies move towards shorter phrases and greater catchiness). 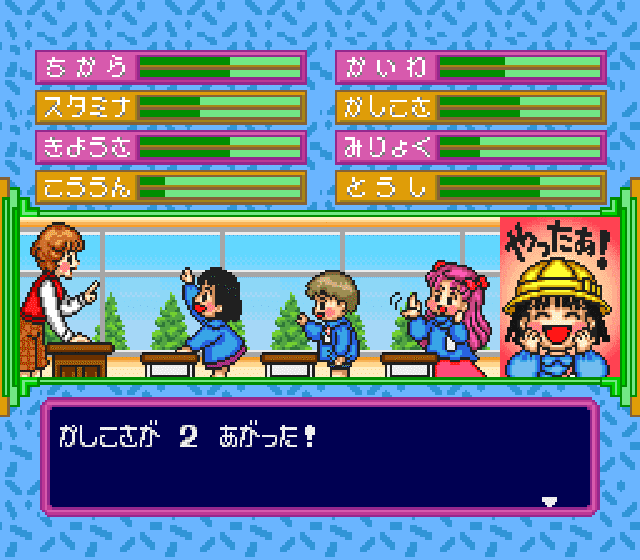 As a result, despite all the cuteness initially on display on the Gokinjo Bouken Tai soundtrack, the music never remotely turns obnoxious. Hand clapping and bouncy rhythms mix merrily with densely layered orchestral elements and hints of carnivalesque charm on the amicable, cosy “Pioneer Kindergarden”. “Rest” introduces steel drums and reggae rhythms, while “Shopping District” and “Bravery” bring a jolt of energy and sing-a-long immediacy with their electric guitar leads.

The biggest non-orchestral influence on display here though is jazz. “Dungeon” surprises with some unusual location scoring, brewing a good-natured, zany mix of jazz and industrial clanging. Where Mori’s jazz writing truly excels is on “Battle”, which goes for full-on, swinging big band jazz. Moving constantly back and forth between saxophone soli, brass fanfares and solo piano, “Battle” is a riveting example of making the SPC chip sound like a jazz band jamming on stage – a constant flow of new ideas and one of the 16-bit era’s best jazz tracks.

On other tracks, Mori reverts to more traditionally classical styles, making them fit with the game’s sunny disposition. “Awakening” greets the day with intertwining woodwind lines atop a gentle acoustic guitar arpeggio. “Study” starts off similarly in the vein of an idyllic town theme, before the flute lead is joined by a solo cello for a downright swooning, richly lyrical duet. As stakes are raised towards the game’s finale on “Watanabe Tower” and “The Last Battle”, Mori again relies on the orchestra’s force and expressiveness to score the occasion. Interestingly enough, he reaches back to Mystic Ark and its antagonist theme here. Particularly “Watanabe Tower” feels at times like a rearrangement of Mystic Ark’s final battle track. However, it’s the sort of arrangement that changes the original material meaningfully, moving it from furious battle track to a slow march with strident, single-minded expression, fit for a final dungeon theme. 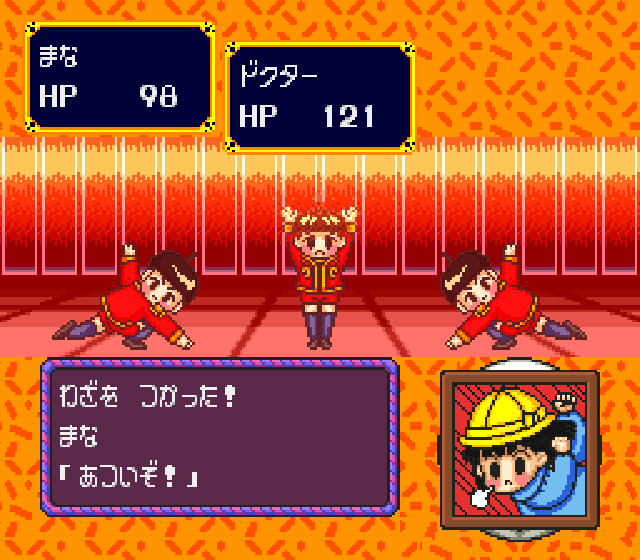 What’s most intriguing about the Gokinjo Bouken Tai soundtrack is another facet of the score though. Remember that Mana’s special talent is being able to talk to the local spirit world. For Mori, this is a welcome excuse to create some striking, atmospheric underscoring during the soundtrack’s second half and also explore traditional Japanese music. And so the music moves from kid-friendly orchestral pop into something far more otherworldly and even uncanny than one would have initially expected.

Mori’s sure hand for mature, sophisticated orchestrations helps these compositions cast their spell without fail. Particularly his use of chromaticism – be it in the clever horn counterpoint on “Shikushiku” or the beguiling string harmonies on “Aquarium” – evokes locations that are mysterious and fascinating. Flute soli on “Enka” and “Kappa Kingdom” denote closeness to nature, once again showing Mori’s talent with long-winded, elegant melodies. “Enka”s subtle eerieness doesn’t interrupt the composition’s lushness of tone, and its outstanding writing for solo instruments is reprised on the utterly delightful “Kappa Kingdom” and its wonderfully synthesised, dreamy cello solo. “Sewer” is another throwback to Mystic Ark – this time more in mood than material, as the track feels like a purposefully disjointed take on “Mother is the Water of all Life” and its evocative ostinato writing.

The spirit realm isn’t always a place for intrigue and wonder though, and Mori skilfully amplifies the previous compositions’ undercurrent of strangeness into sometimes agitated creepiness. “Encounter”’s crisis string motif, discordant hammered piano chords and shrieking flutes are a bit of a shock after the soundtrack’s so far good-natured mood. But the surprisingly violent and edgy cue doesn’t break the soundtrack’s stylistic consistency – previous cues have established a variety of richness and tone that allows the Gokinjo Bouken Tai soundtrack to accommodate even unexpected mood swings.

“Ghost Cave” lives up to its name, using a solo flute to much more haunting effect than other tracks, with some unsettling glissandi effects. And “Old Mansion” surprises with a busy breakdown before the cue’s loop point, when a racing piano line creatively escalates the tension that the music has built up to this point. It’s just one more surprise on a soundtrack that defies expectations on several occasions – like the game that it accompanies, a true hidden gem.