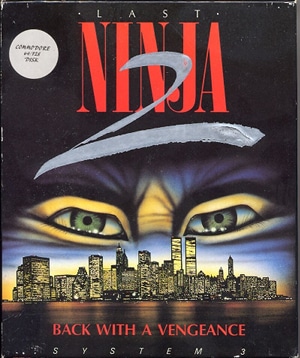 The Last Ninja had been a multi-million smash hit, so developer System 3 didn’t upset the apple cart when they created Last Ninja 2: Back with a Vengeance. The main novelty was the change of scenery: protagonist Armakuni is mysteriously transported from feudal Japan to 20th-century New York City, where he has to defeat evil shogun Kunitoki once again. The new locales added just the right amount of innovation, while the core gameplay largely remained the same. However, System 3 also tweaked and improved important aspects of the formula: better sprite animation, more locations, and a more significant number of puzzles. The result? A whopping 5,5 million copies sold and ports for the Amiga, Atari ST, NES, ZX Spectrum and MS-DOS following in due course. And let’s not forget the confusingly titled Last Ninja Remix, a slightly enhanced re-release of Last Ninja 2 for 8-bit computers.

Ben Daglish and Anthony Lees’ work for The Last Ninja was one of that game’s main selling points, channelling the required sense of Eastern mysticism into one of the most energy-packed and dense 1980s action game soundtracks. Anthony Lees wrote some material for Last Ninja 2, which unfortunately was rejected by the developer, who deemed it unsuitable for the game’s style. In stepped composer Matt Gray, who had already worked on a handful of 8-bit game scores since entering the industry in 1987. However, Last Ninja 2 was his biggest assignment yet, which he landed after System 3 had made him their in-house composer based on his impressive, quickly composed loading track for Bangkok Knight. After three more years of game scoring, Gray became a dance music producer and remixer, co-creating songs for the Pet Shop Boys, Kylie Minogue, Girls Aloud, Sugarbabes – oh, and Cher’s “Believe”.

The Last Ninja 2 soundtrack turned out to be a dream project for Gray (and not just because he got to work on a guaranteed bestseller). This was the first game to feature Gray’s own SID player, which he would deploy and refine on future projects, designing all the sounds within the player from scratch. As with The Last Ninja, System 3 requested individual tracks for each level and loading screen while giving Gray “free reign to produce the coolest music I could”, according to interviews with the composer. Gray happily obliged and delivered 13 tracks that made for an even more expansive score than its already astonishingly lengthy predecessor. His main inspiration came from contemporary dance music and synth-rock – a style that Gray explored further when he rearranged his soundtrack for 2019’s Reformation – Last Ninja 2.

There’s a good reason why the Last Ninja 2 soundtrack is held in even higher regard than the excellent The Last Ninja. What Gray creates here is larger in stature and sound than maybe any other chiptune score up to the point of Last Ninja 2’s release. Gray’s ability to develop his pieces is just as remarkable as Daglish’s on The Last Ninja, even though Gray shapes his tracks in different ways. Whereas Daglish often went for a fairly cinematic, multi-tiered approach, Gray usually displays his dance music inspirations by adding, removing and varying melodies and rhythms every 15-20 seconds. His judgement of how to move around the elements that make up his pieces is absolutely flawless, never losing sight of the bigger picture and the need to create a satisfying arc that can carry a five-minute composition.

Witness the stop-start dynamics of “Central Park In-Game”, which effectively interrupt the track’s constant forward motion only to build tension and expectation – ready to be unleashed during the track’s blazing finale, when the lead melody starts to oscillate frantically as it rises up the scale. Other cues like “The Office In-Game” are less meticulously sculpted, but that’s fine – Gray pumps such an amount of adrenaline into the compositions’s breathless rhythms that it can just happily put the pedal to the metal from the start and never look back. Still, there’s space for subtleties and mood-building: listen to how Gray’s melodies consist of chromatic, uneasily drifting progressions that create a surprisingly claustrophobic mood when they clash with the track’s wall of powerful rhythms.

If there’s one thing about the Last Ninja 2 soundtrack that instantly makes it stand out from the competition, it’s just how BIG it sounds. That’s mainly thanks to the incredibly voluminous, heavy bass sounds that Gray concocts with his SID player. And he flexes that player’s muscles throughout the score, as almost every composition is powered by fantastic bass lines that twist and turn rapidly like on “Central Park Loader”. Their hyperactive energy truly sets the music on fire, finding the sweet spot between raw energy and the kind of complexity that keeps the pieces varied and interesting enough to sustain their run time.

Mind you, Gray’s melodic chops are just as impressive. While his steady drum rhythms and irrepressible bass lines keep the music rushing forwards, Gray swaps a remarkable number of new melodies in and out of each piece. Again, he finds just the right balance, this time between repetition – making the most of each tune’s anthemic hooks – and the need for fresh material. Most of Gray’s catchy, robust melodies suit the soundtrack’s action-heavy nature, providing heroic empowerment for gamers battling legions of foes.

However, unexpectedly introspective moments pop us as well, such as the serene, flute-like melody on “Central Park In-Game” or the whistled lead after 2:43 on “The Street Loader”. Then, there’s the most stunning moment of the entire score on final level track “The Mansion In-Game”. Out of nowhere, after Gray has already built his most superbly developed cue, at 3:27 he introduces the Last Ninja 2 soundtrack’s slowest, most emotional melody (with immaculately realised vibrato). Suddenly, the musical frenzy subsides for a moment, and time magically stands still.

Most of the time though, this is a score that doesn’t rest, casting aside the mysticism heard throughout much of The Last Ninja and replacing it with a grittier, harder-edged sound befitting the game’s urban location. Still, within this stylistic framework, Gray finds various approaches to underscoring the game’s action. There’s the unbound ambition of “The Mansion In-Game”, which runs the gamut of expressions from all-out action to almost ambient, menacing interludes, dramatically culminating in the soundtrack’s most discordant melody. “The Street In-Game” grooves along to tighter, more funk-inspired rhythms than other tracks while its melodies range from approximations of treble-heavy keyboard soli to industrial machine noise.

The soundtrack’s most unusual composition is “The Sewers In-Game”, which relies on what might be the most brooding, gargantuan bass pads written for a chiptune score. They’re veritable black holes that shut out the light and purposefully suck every single bit of air out of the arrangements, painting an aural image of the most suffocating, oppressive location imaginable. It might be less pulse-pounding than the rest of the Last Ninja 2 soundtrack, but it’s ultimately another expression of the maximalist attitude of this jaw-dropping envelope pusher.