Using the SNES’s famed 3D capabilities for a combat flight simulator seems like an obvious choice. However, despite the popularity of After Burner-style games in the late 80s and early 90s, not many titles of this kind were released on the SNES. One of the few SNES flight simulators was the blandly-titled Lock On (not that the Japanese release name Super Air Diver made any sense, but it sure sounds more fun). For post SNES-era gamers, the best way to view developer Copya System’s Lock On is probably as a kind of simplified Ace Combat. Some of that simplification was inevitable, given that the SNES’ famous Mode 7 could only generate 3D graphics of limited complexity. However, in the eyes of many reviewers, the bigger issue was the monotonous mission and gameplay structure that distracted from the game’s fluid, fast graphics.

Where Lock On easily shines brightest is in the music department, thanks to some outstanding work by young composer Akihiko Mori. Mori had been working as a game composer since 1990, but mostly on smaller and less thankful projects. His biggest assignment so far had been to generate the sound effects for Copya System’s Paladin’s Quest (scored by none other than Kohei Tanaka). Lock On was easily the most high-profile project that Mori had been assigned to yet as a composer. And indeed, throughout the Lock On soundtrack, Mori displays the enthusiasm of a talented composer who senses that this project could be his big break – and that turned out to be the case indeed.

Mori scores Lock On with an invigorating mix of rock, jazz, electronic and orchestral elements, mixed to perfection. Stylistically, the Lock On soundtrack doesn’t suggest anything that’s radically different from the template of 1980s adrenaline-driven cool set by After Burner and its many genre brethren (and of course Top Gun). But what Mori presents is an unexpectedly colourful and complex take on genre stereotypes – true to the signature style that he would come to develop and of which Lock On is the first example. 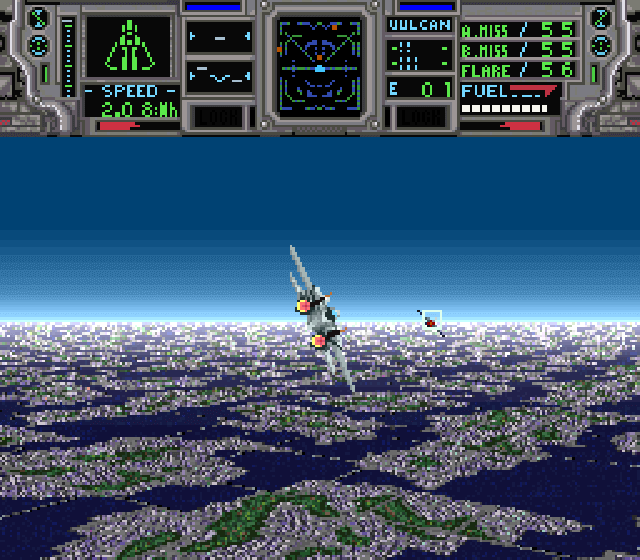 “Mission 1” straightaway announces Mori’s high-flying ambitions to spectacular results. Rising synth chords and pounding rock drums lead into a galloping track with amble funk influences (listen to that beautifully agile, grooving bass). This would be sufficient to make for a winning composition. But Mori goes out of this way and varies the melodic material between triumphant brass fanfares, a free-wheeling saxophone line and a racing, jazzy piano solo. As if that wasn’t enough, purposefully distorted synth leads add some tension to a composition that is already overflowing with energy. It’s fusion rock at its finest, brimming with variety and always tons of fun.

Throughout the Lock On soundtrack, Mori makes use of his large instrumental palette to explore different facets of the genre mix that he perfects on this score. “Mission 2” emphasises the more jazzy aspects of his elaborate formula, both through its swing and the impressive number of rhythm changes and breakdowns. At the same time, there is a rocking, head-banging quality to “Mission 2” and the score in general that keeps the music racing forward at all times. There is never a dull moment on the Lock On soundtrack, as Mori keeps throwing new melodies and segments into each composition – none of the tracks here are simple A/B section affairs.

Indeed, almost every single one of Mori’s compositions here is densely orchestrated and packed with ideas. Listen to “Mission 4” and its competing melodies, performed by saxophone and trumpet, or head over to absolutely rousing “Special Mission 2”, where rising trumpet and saxophone countermelodies compete with synth motifs, while yet more synth lines race by underneath. Mori clearly knows how to write complex compositions that never stand still, but at the same time he always prioritises memorable, substantial melodies over mere musical activity and busyness. 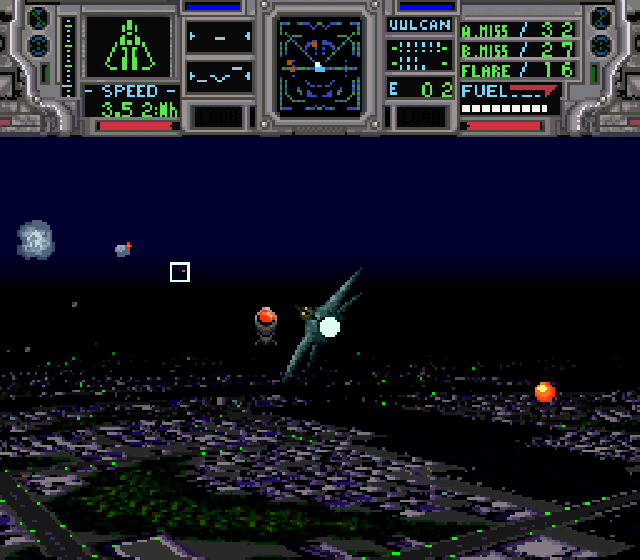 What’s most impressive about the Lock On soundtrack is how much it feels like a session of instrumental virtuosos jamming in full flight – not afraid to show off their chops during lengthy soli, but also able to hold these multi-faceted tracks together when the instruments lock into supremely tight grooves or work hand in hand during rushing call and response patterns. One of the credits in Lock On’s staff roll reads “Music Player: MORImori Rock’ n BAND”. Far from being just a cute insert, that credit needs to be taken seriously – hardly any other SNES soundtrack sounds as much like the product of a great live band as Lock On does.

Mori puts all of the above – the music’s boundless energy, its equally sprawling and focused instrumentations – to good use when he takes things higher and higher towards Lock On’s conclusion. The score’s hard rock tendencies begin to make themselves more and more felt in the soundtrack’s second half. While more straightforward, “Mission 5”’s driving rhythms carry stirring urgency and power, even when the melody lead lies with a solo harp. “Mission 6” is heavier and more intense still, making up for any lack of adventurousness with the determination and catchiness of its shortened melodic motifs. And “Ending” turns out to be a harbinger of the amazing orchestral works Mori would deliver soon. He effortlessly writes a pop ballad with cinematic sweep and a tender, one-minute long flute solo. There’s no doubt that the Lock On soundtrack announced the arrival of a major talent.