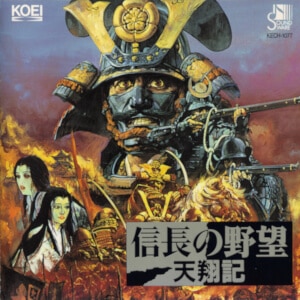 Kanno’s star had been steadily rising throughout the early 1990s. By 1994, she was ready to focus on anime and film scoring – an area she had dabbled in as an arranger in recent years, with her breakthroughs Macross Plus and The Vision of Escaflowne just around the corner. For her farewell to the Nobunaga’s Ambition franchise, Koei once more increased the budget allocation – and considerably so.

Nobunaga’s Ambition: Haouden had been recorded with a small domestic orchestra and on a local sound stage (to mixed results). Tenshouki, on the other hand, had the benefit of being performed by the Warsaw Philharmonic Orchestra. A Japanese video game being recorded by a Polish orchestra might seem surprising, but the same ensemble had done a stellar job on Masamichi Amano’s Giant Robo score in 1992. Tenshouki was the beginning of a fruitful collaboration between Kanno and the orchestra, including works like The Vision of Escaflowne, Brain Powerd and Genesis of Aquarion.

With one of the world’s best scoring orchestras at her disposal, it’s no surprise that Kanno skews more classical on the Nobunaga’s Ambition: Tenshouki soundtrack than on Nobunaga’s Ambition: Bushou Fuuunroku and Haouden. Japanese solo instruments are used very sparingly – instead, Kanno evokes culturally-specific timbres through the clever use of orchestral colours and pentatonic melodies. Also gone are Haouden’s jazzy tendencies – this is classically-inspired music through and through, drawing both upon symphonic and chamber music.

At the same time, Tenshouki’s general character does have the capacity to surprise. One might expect Kanno to go big and bold, now that she finally has access to a large, first-rate symphony orchestra. But instead, Kanno seems to pull back, crafting a far mellower work than the sometimes tumultuous Bushou Fuuunroku. In fact, there’s not a single composition on the Nobunaga’s Ambition: Tenshouki soundtrack that one would call an action or battle cue. It’s worth noting that Kanno decided not to use a single one of the ‘War’ tracks from the PC-98 chiptune original for the PC-98 Soundware version – so Tenshouki’s generally genial mood very much feels like a conscious decision.

Maybe Tenshouki’s lack of sturm and drang is a sign of Kanno’s increased confidence as a composer. She seems happy to identify precisely which ingredients a piece requires to work its spell – and leave it at that. Her restraint and impressive economy of means are particularly evident during the album’s mid-section. “The Cloudy Road” is a peaceful, sunny piano composition with a relatively simple but lovely progression that’s a world away from Bushou Fuuunroku’s rampaging piano showpiece “The Helpful God of War’s Banner Last Chapter”. “Wind Orchid” follows in a similar vein. An elegant air for piano and strings, “Wind Orchid” is an exquisite miniature that belies its short running time and seemingly uncomplicated surface. Dig deeper, and you find a composition that repeatedly changes momentum, tempo and rhythm, without ever sacrificing its lightly dancing motion.

Closing vocal ballad “Distant Blue” is similarly sparsely orchestrated, relying on acoustic guitar, piano and subtle synth pads to back Akino Arai’s intimate, moving delivery. With an almost meditative lilt, “Distant Blue” lacks the hushed grandeur of Haouden’s vocal piece but feels warmer and more soothing. What’s remarkable is how Kanno manages to extend the track’s run time to nearly seven minutes without ever stretching its material – the composition just naturally flows from one beautiful melody to the next.

More fully orchestrated tracks reprise the same general atmosphere, usually to gorgeous results. A particular standout is “Crescent Moon on the Lake”. It pairs a pentatonic, plaintive cello melody with iridescent, beguiling violin chords that evoke the cue’s location to perfection. There’s not much counterpoint or busy musical activity here – Kanno can simply rely on her ability to create the most bewitching harmonies, as the violins’ impressionistic chords glisten in the pale, white moonlight. “Distant Fields” is less heady but features one of Kanno’s best melodies up to this point – a delectable, swooning string tune that carries listeners into a dreamy haze. The addition of castanets in the track’s second half is a creative way to add some colour and energy to the music’s gentility.

Indeed, “Distant Fields” seems to crystallise the feeling of nostalgia that runs through much of the Nobunaga’s Ambition: Tenshouki soundtrack – and it’s hard not to read this sentiment as a result of Kanno saying goodbye to the franchise that started her career. That being said, Tenshouki does have its moments of outright, if often brief, drama. It’s on these compositions that Kanno’s increased maturity in writing for full orchestra becomes entirely apparent. Opening track “The Hawk of Turbulent Times” sets the scene to wonderfully startling effect as brass chords build, only to rapidly descent in a frenzied chromatic motion and disappear. This game of bait and switch continues as the piece moves back and forth between elegant 5/4 rhythms, brutal outbursts of brassy ferocity and a strained flute melody over quivering strings that creates breathless tension.

Previously, Kanno’s orchestral compositions were most definitely rich, subtle creations, but usually fairly obvious in the emotions they sought to elicit. On Tenshouki, Kanno crafts pieces that combine conflicting moods and create more complicated tonal juxtapositions. “Summer Squall” opens in similarly fragmented, edge-of-your-seat fashion as “The Hawk of Turbulent Times”. Finally, the piece settles on a bouncy march whose almost overly jolly mood is undermined by the expert use of acidic, dissonant undertones from the brass and strings – maybe consciously recalling Dimitri Shostakovich’s use of musical irony. “Spring Waves” sees Kanno continuing her exploration of more complex emotional territory, the cue’s mock-pompous brass backing a violin lead that is both imposing and cantankerous – like a mighty warlord throwing a temper tantrum, while the music subtly pokes fun at his presumptuousness.

Kanno closes the Nobunaga’s Ambition: Tenshouki soundtrack on a pitch-perfect note with “Yonder Dreams”, adding tons of romantic sweep and elegant grandeur to the album’s mostly peaceful template. Proceeding with utmost assurance, “Yonder Dreams” is fantastically melodic from the start and only gets more and more beautiful and moving. Part of Kanno’s flawless melody writing is how she throws in sufficient harmonic surprises to sustain the cue’s extended run time – listen to how increasingly passionate phrases end in unexpected chromatic harmonies at 0:45 and 3:13, complicating the music’s emotional flow. It’s hard to imagine a more fitting goodbye to the Nobunaga’s Ambition franchise, and Tenshouki left no doubt that there were great things ahead – both for Kanno and for orchestral game music, a genre she helped pioneer.