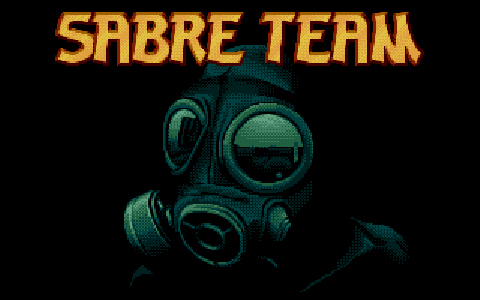 During the second half of the 1980s and into the 1990s, video games starring burly soldiers defending the Western way of life were a dime a dozen (we can at least partially thank Rambo: First Blood Part II and the following wave of copycat movies for that). By 1992, the formula required a bit of tweaking to still elicit interest, and so Krisalis Software made the smart move to turn Sabre Team into a turn-based strategy simulation. Gamers put together a team of four elite soldiers, making the most of limited action points per unit to move them around the isometric maps and attack enemies. Details like the amount of noise produced by different weapons and the weight of their respective ammunition added a surprising amount of realism to the gameplay, turning Sabre Team into one of the Atari ST’s best strategy games.

As you would expect from a Krisalis game, Matt Furniss delivered the Sabre Team soundtrack – or rather, its different versions across various platforms. Most of the multi-computer platform releases of the era would present the same score in different guises. With Sabre Team, Furniss took a more ambitious approach. The Amiga port of the game saw him pushing the sonic capabilities of the platform with a mostly atmospheric, texture-driven soundtrack that created a gritty, urban environment. Furniss’ innovative approach yielded an intriguing, but not always captivating score whose ambiences weren’t consistently compelling enough to sustain the tracks’ considerable duration.

Out of the various platforms that received a Sabre Team release, the Atari ST was easily the most sonically limited one. A downgraded version of the Amiga score wouldn’t have made much sense – there was little melodic content that the Atari ST version could have latched onto. And so, Furniss created a different score for this particular release (to be clear, though, it’s not confirmed whether the Amiga or the Atari ST soundtrack came first). It’s significantly shorter than the Amiga score, but that might be one of its strengths – and it’s by no means a less resourceful work, as Furniss finds the perfect sweet spot between rhythmic gratification, creative melodies and potent atmospherics. If there’s something that unites the first three tracks of the Atari ST Sabre Team soundtrack, it’s a sense of controlled agitation and nervousness – perfect for what’s effectively a stealth game. Many scores of this particular genre struggle to turn their necessarily subdued nature into a compelling listen, fading into the background. Furniss elegantly sidesteps this issue, crafting chiptunes compositions of unshowy complexity and subtlety. His densely layered rhythms drive the pieces forward as you would expect, but they also create syncopated, surprising patterns that complicate the music’s momentum. Melodies are confident, but never swaggering – instead, they proceed cautiously, often progressing in unexpected intervals. “Track 02” makes particularly good use of the contrast between chunky, rhythmically tricky beats and a sneaking lead melody. The melodies’ generally languid pace also allows Furniss to develop them at length, as he does to immensely satisfying results on “Track 01”.

The Atari ST might be unable to replicate the Amiga’s sampled atmospherics, but that doesn’t mean this version of the Sabre Team soundtracks lacks scope. “Track 01” opens with ominous bass drones and a nervously rising and falling arpeggio, only slowly introducing its melodies and rhythms – setting the scene for the upcoming espionage adventure in cinematic fashion. “Track 03” is more enigmatic still, surprising listeners with a calm, yet tense opening for high-pitched, suspended notes clad in beautiful vibrato effects. It’s a fitting start for a taut, pressing cue that takes great pleasure in tweaking chiptune action music conventions. Listen to how at 0:54, the melody line turns twisted and distorted, almost falling apart, before trailing off on a dissonant final note. Right after that, Furniss cleverly teases the introduction of another reassuring melody lead that never eventuates. There is no doubt that this is action game music, but the kind that never breaks into obvious heroics, instead keeping gamers and listeners on edge with its perfectly modulated ebb and flow. This even applies to the two pieces that seem to underscore victory. “Track 04” initially appears to mimic “Track 01”’s opening, but then segues into a more upbeat sound that initially feels like a break with the rest of the soundtrack. However, tension remains present in the cue’s unpredictable melodic turns and the way its agitated arpeggios simmer just beneath the cue’s optimistic surface.

Even “Track 05”’s seemingly relaxed, contend mood is soon undermined. Its introspective melody lead suddenly plays in chromatic, uneasy harmonies that give it a hollow, eerie feel. Insistent staccato figures then keep interrupting the melody, before the cue ends in a series of sustained, vibrating notes – leaving narrative and emotional resolution up in the air. Such an open-ended, fascinating close perfectly suits this fiercely creative score that doesn’t shy away from subverting expectations and genre formulas – just like the game itself.