While seeing Sega franchises appear on Nintendo consoles has become common, back in 2000 – when Sega still had a stake in the console wars – the situation was very different. It was all the more surprising then that Sega decided to port one of its franchises – Sakura Taisen – to the Game Boy Colour (it’s worthwhile mentioning that less than one year earlier, the Neo Geo Pocket Colour had received a Sonic the Hedgehog port). Maybe not surprisingly, Sakura Taisen GB’s developers didn’t attempt to replicate the scale of previous franchise titles on the small handheld console. Instead, the game proceeds more along the lines of a dating-sim, with players controlling a character who spends a month training and living with the Hanagumi group of theatre actors/defenders of the planet.

Sakura Taisen GB also focuses a lot more on conversations and character interactions than on battle confrontations. Combine this with the game’s forgiving difficulty curve and excellent production values, and you have a title that makes a pronounced effort to welcome gamers and deliver a pleasant rather than challenging experience. Part of this mix is a soundtrack by series stalwart Kohei Tanaka, for whom the Sakura Taisen franchise would become his most successful work and musical calling card (until One Piece came along, that is).

Interestingly enough, it’s the Sakura Taisen GB soundtrack that emerges as the franchise’s most successful score, despite its far smaller scale (and not entirely consistent quality – but there’s ultimately enough to enjoy here to warrant an entry on this website). Tanaka’s Sakura Taisen soundtracks on home consoles – despite showing promise – tend to wear their melodic material thin pretty quickly, with not nearly enough substance on display to sustain these often lengthy scores. Sakura Taisen GB embodies the opposite approach: boil the music down to its essentials, let the melodies do their job, then move on to the next section or cue. It’s an environment in which Tanaka’s tunes can work their charm instead of having to support larger musical structure or scores. 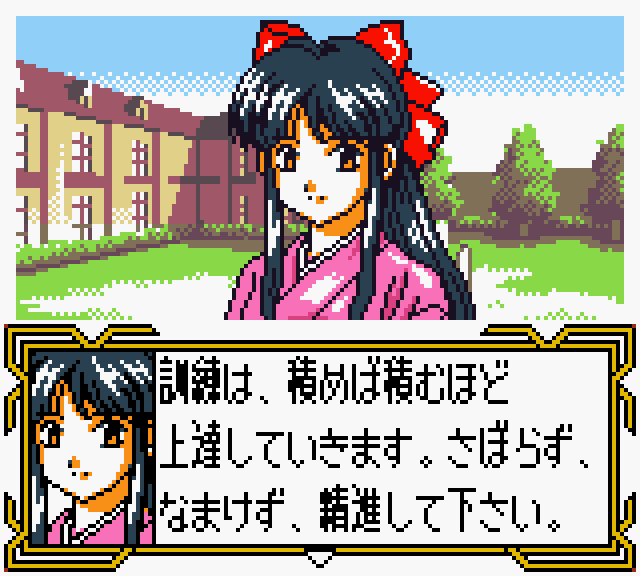 Of course, the Sakura Taisen GB soundtrack must kick off with a chiptune arrangement of the series’ unofficial main theme, “Declaration! Imperial Floral Assault Group”. The GBC version of the theme keeps all the upbeat energy of its immediately catchy pop melody, buoyed by some subtle march influences in the rhythm section. The strong bass presence on display here gives the cue a solid foundation that earlier renditions on other platforms didn’t have. Tanaka also elegantly adds some harmonies and melodic counterpoint on the second square wave channel when the melody returns for the second verse, instead of simply repeating the tune.

It’s a good example of Tanaka’s approach on this score – keep things melody-focused and to the point, but also add just the right amount of embellishments to give the music more depth and variety. Indeed, with the Sakura Taisen GB soundtrack, Tanaka manages to fuse his pop and orchestral inspirations better than on most of his other scores. The GBC’s limitations audibly force him to focus on melodies and shorter compositions (although it has to be said that Tanaka’s Sakura Taisen GB2 has little of its predecessor’s melodic interest). In keeping with this approach, Tanaka’s use of the GBC’s sound channels is hardly innovative, but it gets the job done and adds a few intricacies here and there.

For example, take “Track 02”, a surprisingly convincing chiptune take on traditional Japanese music. It’s a feat that’s immensely difficult to pull off, considering how much this music’s sparse textures rely on the subtle expressions live instruments are capable of. Tanaka initially navigates this challenge by writing a solemnly progressing, beautiful lead melody. Soon, the tune is joined by a second line, playing in counterpoint or producing crystalline harmonies. Cleverly, these don’t aim to replicate the timbres of traditional Japanese music authentically. Instead, they capture its ethereal essence – turning the hardware’s limitations into a strength to create a characteristic sound. Later on, a decidedly game music-inspired chiptune arpeggio adds an understated and fitting modern touch to a piece that emanates peace and serenity. 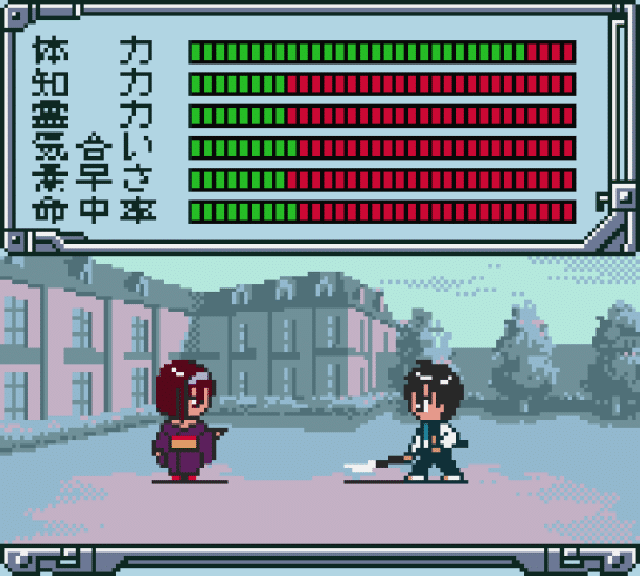 In keeping with the game’s less-than-taxing nature, the Sakura Taisen GB soundtrack is thoroughly welcoming, best heard on “Track 03” and “Track 04”. They play like elaborate takes on the classic Game Boy RPG town theme, with their calm, constant rhythmic accompaniments and languid lead melodies that lilt with a dreamy sing-along quality and just a hint of nostalgia. “Track 03” also introduces a slight march character to its rhythms, suitably addressing the school environment. However, these rhythms never turn remotely martial, instead giving the music a gentle bounce as the track contrasts a certain rigidity with warmth and hints of liveliness. Both “Track 03” and “Track 04” benefit from long-spun, rich melodies that are ironically better developed than most of what Tanaka has written for the mainline Sakura Taisen series.

Making the music more delightful still, the score features some fun genre pastiche. “Track 05” might be the only tango written for a GBC title. The dance’s characteristically strident rhythms translate well to a rendition on the GBC’s gritty noise channel. Tanaka again shows attention to melodic detail, embellishing each melodic phrase’s end with a brief upward or downward run on one of the square wave channels. His skilful writing also manages to transpose tango’s romantic yet tense nature onto the chiptune hardware.

“Track 06” has a crack at rock’n’roll rhythms – again, it’s nothing too raucous but still energises the music’s benign mood. Clever use of the wavetable channel helps capture the music’s rock inspiration, creating a swinging, tuneful bass line. Capped off with a triumphant victory fanfare in “Track 07”, the Sakura Taisen GB soundtrack stands as one of Tanaka’s more humble works, but it is also one of his most finely crafted ones.