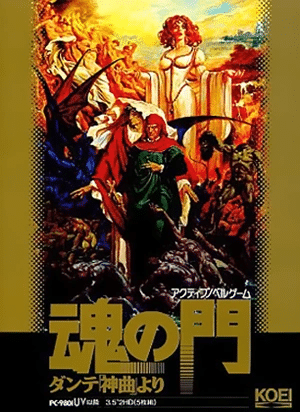 For the game’s soundtrack, the developers turned to Masumi Ito, Yoshiyuki Ito and Fiori Wakakuwa, who composed the Tamashii no Mon – Dante no Shinkyoku yori soundtrack under the moniker of hyym. There’s little information available on Wakakuwa’s work – his only other credits seem to be Koei’s Super Mahjong Taikai and Inindo: Way of the Ninja. The opposite is true for the wife and husband team of Masumi and Yoshiyuki Ito. Starting their careers as arrangers and composers on various Koei titles, they continued to arrange game music into the mid-1990s for numerous album releases – including Super Metroid, Virtua Fighter and Donkey Kong Country. They then moved into anime scoring. Masumi Ito also launched a career as a singer with several solo albums and Yoshiyuki Ito worked as Head Music Producer of Lantis – both artists amassing an impressive discography of 100+ titles each.

Scoring Hell is a tantalising prospect for composers – it gives them license to dabble in unusual sounds as the artists seek to match this most dreadful of locations aurally. And do the Itos and Wakakuwa ever make the most of this opportunity to delve head-first into some bizarre sonic experiments. The Tamashii no Mon – Dante no Shinkyoku yori soundtrack turns out to be a roiling cauldron that combines an astonishing number of musical genres and ideas into a unique whole. It follows a similar approach as many Castlevania scores, mixing a generally Gothic mood with modern influences. However, this score goes way further in providing a fresh take on tradition – at times, it feels like the heady nature of a 70s prog-rock concept album collides head-on with early 90s electronica. 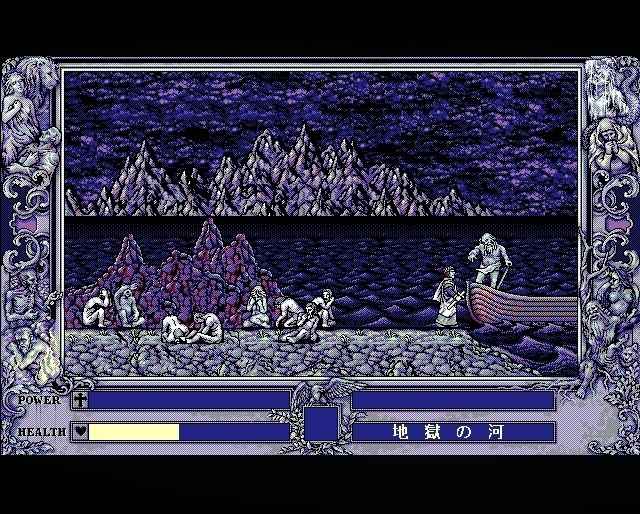 Take “Techno Troubadour”, the soundtrack’s most optimistic – and genre-bending – cue. Its opening lithe lute melody suits the game’s medieval inspiration well – before a pumping 80s R&B bassline kicks in, soon mixing with a house-style piano lead. And that’s before the composition truly takes off, adding a rapturous solo violin on top of a harpsichord and all the other elements mentioned above. It’s wholly idiosyncratic but works wonderfully well and creates a uniquely uplifting (if also confounding) mix of musical styles. In this kind of environment, a children’s choir (Masumi Ito’s voice overdubbed several times) singing the lute melody hardly feels out of place and matches the cue’s brief bout of elation.

As you would expect, most of the Tamashii no Mon – Dante no Shinkyoku yori soundtrack is a sombre affair, witnessed from the get-go by opening track “Divine Comedy Renaissance”. Faintly reminiscent of new-age band Enigma, the cue mixes more traditional elements (a stately church organ) with dance rhythms and simple, dramatic synth melodies. It’s an effective opener, although it can’t help but feel a bit tame compared to what’s yet to come – and those lusty female vocals intoning “Porta del inferno!” are cheesily melodramatic. Then again, they’re testament to the composers’ dedication to throwing just about anything they can think of at the wall for this score – and surprisingly enough, a lot of it sticks.

Indeed, while several cues here sound like the composers threw a truckload of disparate ideas into a blender, their compositions ultimately come together remarkably well. These are consistently atmospheric pieces, sometimes bordering on the surreal – but then again, that’s only appropriate given the game’s setting. And throughout the entire soundtrack, the composers continuously find new ways to mix new and old. For example, “Dark Forest”’s ominous synth washes and trip-hop beats, combined with abrasive glissandi and disorienting sound effects, already generate an atmosphere thick with dread and foreboding. On top of that, the music then achieves unexpected, twisted grandeur through the addition of an operatic alto solo. “Wise’s Man’s Hill” similarly uses operatic vocals to move listeners, but now contrasting voices with a calm, pop-influenced piano ballad that turns into a lushly dreamy section including chimes, uplifting synth pads – and fluttering bird sounds. 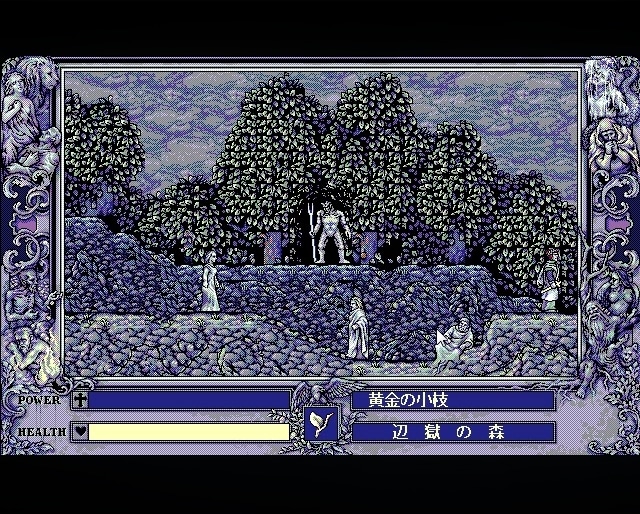 Part of the reason why the Tamashii no Mon – Dante no Shinkyoku yori soundtrack manages to combine traditional and contemporary influences so well is the composers’ firm grasp of effective orchestral writing. Take “Malebolge”’s well-developed, lengthy deep string melodies that create the tragic gravitas one would expect from a score about lost souls fighting their way out of Hell. But then eerie, distant chanting and entirely unexpected computer noise effects add an effectively alien dimension to these familiar, classical strains. “Vengeful Witch” takes things a step further. Symphonic bombast, more operatic vocals, and harsh, processed orchestra hits battle with stuttering beats and manipulated voice samples. The latter turn hardly recognisable male vocals into a scat singing rhythm instrument and female voices into transcendentally abrasive, blinding rays of light. For a while, it’s the score’s most psychedelic, out-there piece.

But just like there’s logic to the compositions’ madcap genre patchwork, there’s a discernible arc to the Tamashii no Mon – Dante no Shinkyoku yori soundtrack – and so things must get weirder still before it’s all over. There’s method to the composers’ madness, as they bring things to a head once the score’s conclusion looms.

“Pluto’s Cliff – Styx” takes the crown as the soundtrack’s most challenging composition – no small feat. At first, a forlorn flute lead dances atop trip-hop beats and an organ ostinato that soon turns into a surprisingly fully-fledged solo. Manipulated choral voices that are cut off prematurely before the end of each phrase enter, before a screeching violin solo screams from the deepest circles of Hell. And finally, the cue goes for the kill when a free-jazz alto sax and an electric guitar furiously tear each other to shreds in an exhilarating three-minute avantgarde noise showdown, mercilessly driven onwards by ritualistic percussion. It’s unlike anything heard in game music up to this point, and in its visceral, blasted intensity, the track is entirely appropriate for the terrifying locations it underscores.

But finally, Dante’s journey must lead into the light. “Purgatory” is a bit on the lengthy side, but maybe that’s appropriate for music accompanying the slow transition from heaven to Hell. After a string dirge and agonised violin material, austere electronic pulses trade places with 80s synths à la Vangelis (who once wrote a concept album called Heaven and Hell). These tenderly flowing episodes offer languid passages of uninterrupted, patiently developed melodic beauty with their swelling, yearning tones. Closing track “The Spheres of Heaven” develops this mood further without ever falling into saccharine clichés. These lavishly scored celestial realms remain a strange domain, despite all the tinkling chimes and tolling bells. It’s the final destination of an awe-inspiring aural journey that tells its epic tale with as much gravity as one could hope for – only in entirely unusual ways that still have no equal in the realms of game music.