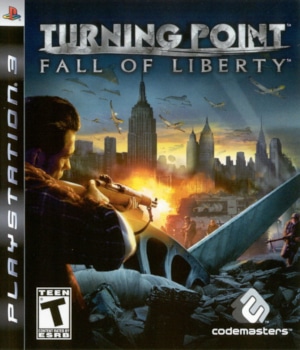 It’s surprising to see how little attention this score has attracted. Of course, the easiest explanation is the score album’s rarity. Never available commercially, the album came as a bonus item of the game’s Xbox 360 collector’s edition. Another reason why the Turning Point: Fall of Liberty soundtrack disappeared from view is the game’s commercial failure. But the most intriguing explanation for the obscurity of Giacchino’s work for Turning Point is the unusual nature of its sound world – both when compared with Giacchino’s other game scores, and Western game soundtracks in general. This is Giacchino at his most experimental and acerbic – both across his game and film scores.

True, “Main Title”’s French horn melody has the same sense of proud patriotism as the composer’s Medal of Honor scores. However, soon surprisingly dissonant violin tremoli attack the noble theme, which is one of Giacchino’s best melodic inventions. These harsh interjections are a harbinger of what is to follow throughout the Turning Point: Fall of Liberty soundtrack. Giacchino’s writing had already turned decidedly less melodic and overtly emotional on Call of Duty and Medal of Honor: Airborne. However, Turning Point takes these inclinations further and introduces a new sense of disorientation and chaos to Giacchino’s music. 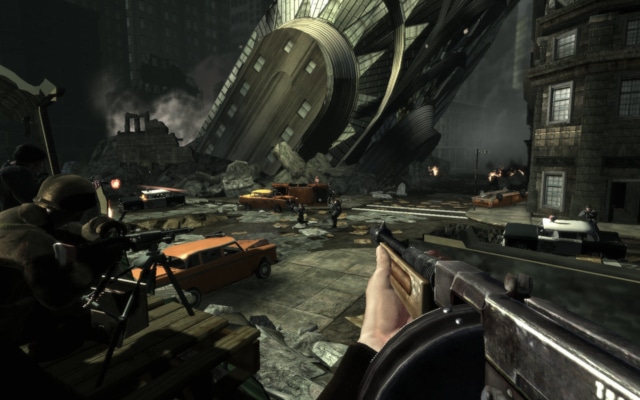 Those who expect Giacchino to continue the emotionally gushing approach of Medal of Honor: Frontline are in for a rude awakening once “Skyscraping” brushes aside even the last bits of “Main Title”’s sentimentality. This fierce composition savagely hammers out heavy rhythmic accents and forcefully strident melody progressions. Fittingly, the pounding percussion rhythms – often doubled by brass and xylophone – keep abruptly changing direction and volume. And what little consonant, melodic material we hear almost desperately struggles to hold its own against the music’s jagged aggression.

Turning Point’s percussion onslaught is by no means a way to simply give the music an adrenaline kick. Instead, the percussion section’s biting, irregular patterns give the soundtrack a nervy edge and jittery energy that feels driven, never uplifting or empowering. Both harsh and invigorating, the music moves in enigmatic stops and starts, creating claustrophobic feelings of tension and fright. Giacchino’s material is purposefully fragmented, but in another display of his compositional skills, the music never loses the listener’s interest. The most impressive display of this quality is “The Tower of London”. After its edgy opening ostinato, the composition disappears into a twilight netherworld. Only hushed fragments of sounds float through the nocturnal ether for minutes on end – and it’s captivating all the way.

“The Tower of London” is the soundtrack’s most deconstructive moment, pushing the boundaries of Giacchino’s musical vocabulary. The way the composition willfully undercuts first-person shooter scoring traditions highlights one of Turning Point’s most exciting traits. At times it feels like Giacchino heightens the music’s already plentiful sardonic bite and turns it into open satire. Just listen to the way “The White House”’s ferocious brass attacks are almost frivolously imitated by flute and xylophone. The latter play the same supposedly commanding rhythms, mocking them through the xylophone’s inevitably light-weight timbres. 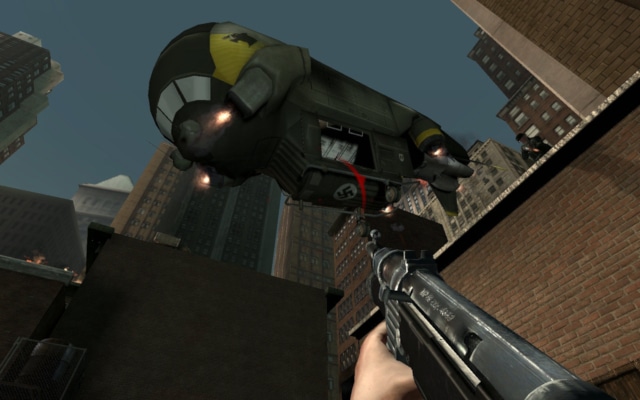 It’s no surprise then that for most of the album, there is no romantic sense of glory, of valiantly fighting against the odds. All that remains in these sometimes maniacally driven compositions is the breathless hope for survival. Remarkably, even when the music calms down during a few interludes, relief or maybe even encouragement remain elusive. The harmonic material on “Escape from New York”, “On the Trail to DC” and “DC in Ruins” is bleakly sparse. Their sustained string chords hover in limbo, mournful but not melodic enough to inspire grief or any particularly emotional reaction.

In the end though, the Turning Point: Fall of Liberty soundtrack – believe it or not – has a happy conclusion. Throughout the score, the main theme returns as a harbinger of safety, an ordering force amidst the continuous tumult. Giacchino’s careful thematic preparation finally bears fruit on penultimate track “The Zeppelin”. The composition opens with Giacchino’s most harmonically advanced string writing on any game project of his. Feelings of insecurity then slowly fade away as the main theme asserts itself, more and more forcefully, until it leads the piece to a triumphant, reassuring finale that minutes ago would have seemed out of reach.

Arguably, the Turning Point: Fall of Liberty soundtrack is the enigmatic culmination of Giacchino’s writing for war games. It’s fascinating to behold how Giacchino has found the most effective way to remove the glamour from first-person shooters’ depiction of war – not through sincerity as on the Medal of Honor games and Call of Duty, but instead through caustic near-mockery. There’s little else like Turning Point in the realm of game music, where composers use satire and parody far too rarely.