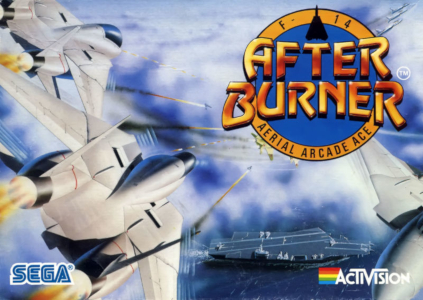 The immersive 3d-action and visual fireworks of 1985’s Space Harrier were unparalleled for its era. Sega quickly realised they were on to a winning formula and began to churn out several games that made more and more advanced use of the company’s Super Scaler technology. After motorbikes (Hang-On) and racing cars (OutRun), Sega chose fighter jets for 1987’s action extravaganza After Burner. In many ways, After Burner is the perfect summation of the arcade game experience: blinding speeds, non-stop action – and a difficulty level that focuses more on parting gamers with their quarters rather than providing a fair challenge. The latter point was less of an issue for the many, many console and home computer ports that this genre classic and franchise starter saw in subsequent years. Some platforms even received two After Burner ports – for example, C64 users got to choose between a European and a US version.

That unconventional release strategy might have been due to the European version’s disastrous quality. Porting a technological powerhouse like After Burner from the arcades to a far inferior platform like the C64 and creating a quality product in the process was always going to be a tough ask. However, developer Dalali Software’s efforts still underwhelmed, resulting in a universally panned title. As so often, the only aspect of the game that’s fondly remembered is its music – something we can thank Adam Gilmore for.

A veteran of the late 1980s/early 1990s European PC game music scene, Adam Gilmore was still in the early stages of his career when he was asked to port Hiroshi Kawaguchi’s original compositions to the C64. Kawaguchi came off a career-high with OutRun, and his After Burner score proved equally popular – so much so that his soundtrack was commemorated through a whopping six-CD box for the game’s 20th anniversary. As for Gilmore, he repeatedly mentioned the European C64 port of After Burner as one of his favourite works (out of the many dozen he worked on during his career). He also pointed out that his job was made easier because he received the arcade music’s sheet music (via fax) – a rarity during this era when composers often had to transcribe music by ear when porting scores.

Now, truth be told, After Burner – despite the love and acclaim it has received over the years – is not Kawaguchi’s best work. While it pulls off Top Gun-style, hook-heavy synth-rock well enough, its melodies are nowhere near as strong as those of the early Raiden games, for example. Meanwhile, while ambitious in their extended length, the score’s arrangements aren’t as elaborate as those of fellow action-flight simulator Lock On. Like Matt Furniss’ Sega Master System port of Battletoads in Battlemaniacs, Gilmore’s C64 version of the After Burner soundtrack is a technologically inferior port that doesn’t change the original score’s material but instead makes lots of smart tweaks to improve on what came before.

Take the soundtrack’s first substantial cue, “Final Take Off”. Kawaguchi’s rhythm work is nicely varied, particularly thanks to an agile bass line, and the cue’s lengthy structure is far more ambitious than most other game music of the time. However, Kawaguchi’s melodies – while steadily developing – never truly take off, giving the cue a meandering feel. Gilmore’s port feels more urgent and tense right from the start, thanks to his skilful, copious use of arpeggios and sharper accents on each note of the initial melody line. Once the main melody kicks in, it’s mixed into the background, competing with the arpeggios and rhythm track. The result is a significantly denser texture, full of busy counterpoint and conflict that the comparatively laid-back original lacks. Even the long melody solo in the second half feels more decisive and forceful now, fully realising the dramatic arc of the composition.

Elsewhere, repetitive melodies become an issue for the arcade version of the After Burner soundtrack, for example on “Red Out” and particularly on “Super Stripe” (despite the latter’s nicely interlocking grooves). Gilmore manages to fix “Red Out”, initially through the simple but effective decision to turn every note of the original melody into the beginning of an arpeggio line. This once more creates swirling textures that are more thrilling than Kawaguchi’s original. With all that pent-up tension, the sudden shift to the B section’s higher-pitched melody comes as a striking surprise that doesn’t let the music’s intensity drop, thanks to nervously oscillating, rising background arpeggios. Even the arcade cue’s robust opening synth pads and steely bass find a suitable C64 equivalent in a bass line that almost feels like a rave. Sadly, “Super Stripe” is less successful, its chromatic harmonisations of the monotonous lead melody somewhat grating.

Gilmore not only ports and tweaks Kawaguchi’s compositions – he also makes cuts where they are sensible, for example on “After Burner”. In the arcade original, Kawaguchi’s rhythms chug along merely dutifully, while his melodies would work better if performed as an electric guitar solo. Gilmore’s adaptation initially leaves a similarly middling impression but perks up once he uses the transition into the B section and accompanying key change to throw in more dramatic arpeggios. From here onwards, the track soars and dives, cleverly spending more time with the fiery B section material than the arcade original. Importantly, Gilmore gets to the note-shredding metal solo that caps off the cue in suitably blazing fashion much quicker than the arcade version, excising some unnecessary repetition of material. Such artistic liberty cements Gilmore’s ambition to turn the After Burner soundtrack from an arcade score that’s just a bit too relaxed into a rip-roaring action bonanza, technological limitations be damned.