Board games are arguably a lot easier to turn into video games than say movies. They already function as games, have a set of clearly defined rules, and often enough feature just enough backstory to efficiently set up the game’s world. The sheer number of Dungeons & Dragons video games is a testament to the close connection between both worlds. Of course, the success of the Dungeons & Dragons tabletop games inspired others to follow in their footsteps. In 1989, US board game manufacturer Milton Bradley tried their hand at a fantasy-themed title called Hero Quest. Despite its generic presentation, the game was fairly successful around the globe, with several expansions, new editions and even novels published.

The inevitable video game ports of Hero Quest arrived in 1991 on several home computer systems and the NES. Developers 221B Software Development looked after the computer ports, while Eurocom handled the NES game. Unfortunately, that title was ultimately cancelled and never officially released. As for the various computer ports, they were reasonably well received by video game journalists, although reviews ranged from very strong to merely middling. While some scribes welcomed the game’s accessibility, others bemoaned its low difficulty level, and that Hero Quest stuck too close to its original board game mechanics.

As with many other titles published by Gremlin Graphics, game music veteran Barry Leitch wrote the Hero Quest soundtrack for the various computer platforms (Amiga, Amstrad CPC, Atari ST, Commodore 64, DOS and ZX Spectrum). The game turned out to be particularly challenging for Leitch, who was only given 30kb for the in-game music on the Amiga. As a result, he was forced to use the tiniest possible instrument samples – single-cycle waveforms (similar to the approach David Wise would take on his Donkey Kong Country soundtracks). The effort was worth it though – in an interview, Leitch ranked his Hero Quest in-game music as one of his ten favourite tunes.

Out of the different versions of Leitch’s Hero Quest soundtrack, the ZX Spectrum port turns out best. As you would expect, the Amiga port sounds most realistic and lavish. However, there are some niggling issues, like an occasionally piercing melody voice (particularly on “Title”), as well as ineffective orchestration choices, such as the out-of-place electric piano on “In-Game 01” and some overwhelming bass sounds. The Atari ST port sounds almost identical to the ZX Spectrum version – which ultimately is a disappointment, given the superior sound capacities of the Atari ST. Lastly, the C64 version only features the title track in a faithful rendition that’s pleasant in and of itself. It just can’t help feel murky and overly bassy compared to the ZX Spectrum score, making it harder to appreciate the intricacies of the different layers within the composition.

Leitch has good reason to be fond of “In-Game 01” – the way it manages to organically ebb and flow (well, almost) over seven minutes, with its melody constantly reinventing itself, is impressive. A gently fluttering ostinato provides the track’s basis, evoking a dream-like mood that’s a perfect fit for the game’s adventures set in faraway lands. Leitch’s melodies are both subdued and majestic, straddling the divide between the expansiveness of classically-inspired prog-rock melody lines and the catchiness of great pop tunes. The track builds over more than three minutes until it settles into a steady march rhythm, making the most of the momentum built so far… only to be abruptly cut short, before the music returns to the opening’s pensive atmosphere, realised just as beautifully as before.

Throughout all of this, “In-Game 01” rarely sounds very adventurous. Instead, the Hero Quest soundtrack mixes the lushness of its fantasy-inspired sounds (helped by Leitch’s technical wizardry) with unexpectedly calm, even intimate strains. It’s a surprisingly emotional, sometimes longing composition that immensely benefits from Leitch’s patience that carefully widens the piece’s scope. Witness how the soothing opening moves into a riding rhythm that increases anticipation before heavier percussion joins at 2:35, accompanied by ominously rising and falling bass glissandi – and then the main march section finally sets in. There’s no doubt this is epic fantasy scoring, but it’s realised with quiet, intriguing means.

Leitch’s other two tracks on the Hero Quest soundtrack – “Title” and “In-Game 02” – aren’t as show-stopping, but still maintain the score’s high level of quality. “Title” feels like a denser, more energetic companion to “In-Game 01”. A plodding melody, presented over constant arpeggios and stately rhythms, turns prouder and more animated as the track progresses, while the music’s complexity increases until the cue rushes forth in excitement. Again, Leitch writes a constantly evolving melody that remains memorable in all its shapes. It is sufficiently heavy to conjure the gravitas of a great fantasy adventure, but equally agile enough not to drag. 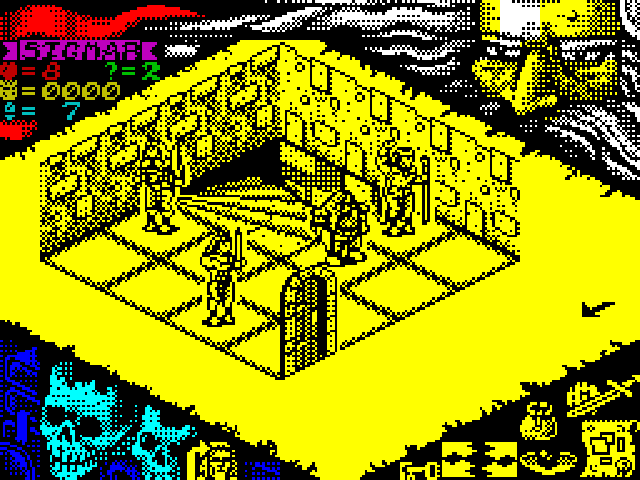 “In-Game 02” feels like the Hero Quest soundtrack’s most straightforward chiptune composition, delivering a fitting, if somewhat low-key and reflective ending to the adventure with its anthemic melody lead and steady rhythms. The cue strikes just the right balance between heroic pride and wistfully looking back – a mix of emotions that Leitch articulates throughout the entire score, giving Hero Quest its individual character amidst the masses of fantasy game scores.