On Duty Cycle Generator, Baldwin shares his view that the Hero Quest soundtrack “is probably some of the best NES music” he did. It’s safe to say he’s correct in that assessment. Prior works by Baldwin (and his later Ferrari Grand Prix Challenge) can feel like exercises in arpeggio-based NES compositions. Those arpeggios were a relatively easy way to generate a lush sound with the NES’ limited hardware. There’s no doubt that Baldwin handled the arpeggio sounds driving his compositions with virtuoso technical skills matched by few other composers. Still, particularly a fantasy-themed work like Magician feels deficient in other regards, for example engaging melodies and moods.

The Hero Quest soundtrack is the first of Baldwin’s works where he finds a comfortable balance between technical complexity and a stronger emotional connection with the music, underpinned by appealing melodies. “Title Screen / Menu / Quest Story” opens with an appropriately medieval-sounding, stately melody over a slow arpeggio. It’s a scene setter that recalls the ‘once upon a time’-opening of many other NES RPGs. That includes Magician, but this time the melody is more involving. It leads up to an ear-catching ritardando, achieved manually by gradually increasing note lengths. A clever, rarely deployed method in game music, it gets listeners guessing what might come next… 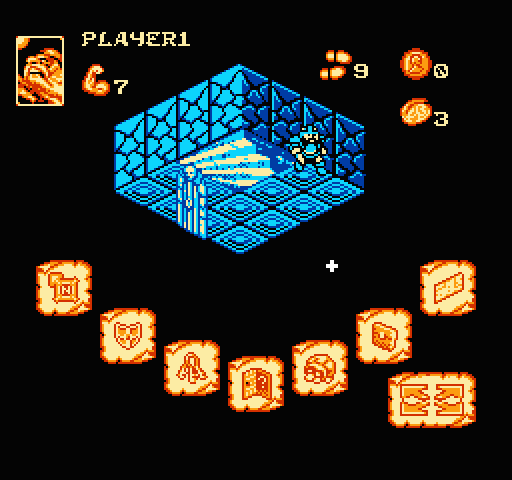 And then more contemporary beats set in, waves of sweeping arpeggios back a heroic melody lead that oozes high adventure, and the music rides off to conquer the world. While more melody-focused than Baldwin’s other scores, a lot of “Title Screen / Menu / Quest Story”’s emotional pull still stems from his technical wizardry. The sounds emanating from all channels have a warmth and weight that are rare for an NES score. Additionally, Baldwin’s idea to have the arpeggios alternating octaves to create even denser textures gives the music precisely the orchestral feel he was after. While Barry Leitch‘s computer ports of Hero Quest evoke the game’s fantasy world by suggesting vast open spaces, Baldwin is busy filling these spaces with as much musical activity as he can muster.

On that note, “Dungeon Theme (Overworld)” feels like Baldwin’s definitive, most fleshed-out statement on arpeggio composition. It’s a relentless onslaught of cascading notes that has just the right amount of melodic backbone to pull listeners through what is one of the longer NES compositions (nearly 3 ½ minutes unlooped). An invigorating wall of sound, “Dungeon Theme (Overworld)” is one of those NES cues that challenges you to untangle the web of competing musical lines and figure out how on earth one could create such a track with the NES’ four sound channels.

“Dungeon Theme (Overworld)”’s sumptuousness makes it an ideal match for an RPG. The track’s aural richness gives it a grand scope that far exceeds the soundtrack’s short running time. The music’s breadth and energy, generated to no small measure by wonderful vibrato effects on the full-bodied arpeggios, sets the scene for a powerful finale as the music spirals higher and higher and ends with a literal bang. It doesn’t make for a great loop point, but musically it couldn’t be a more satisfying conclusion.

The same goes for the Hero Quest soundtrack’s closing composition, “Ending (Unused)”. The cue picks up the contemporary elements from previous tracks and translates them into a slow power ballad. The track is driven by a huge, anthemic drum sound that is one of Baldwin’s most impressive accomplishments here. Just like previous compositions had orchestral ambitions, “Ending” aims high. But it aims in a different direction and actually plays like the end credits song of a big Hollywood movie (in 8-bit, of course). The simple, but wistful melody lead is once more beautifully complemented by vibrant arpeggios. Their glow equally permeates the lead melody’s suspended, achingly swelling notes.

“Ending” concludes not necessarily the best of Baldwin’s NES soundtracks overall. That honour would have to go to the following year’s Erik the Viking. However, what “Ending” does is to complete a trio of Baldwin’s most outstanding, substantial NES compositions.